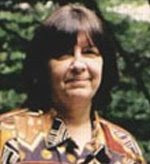 Katherine Allred was born in Arkansas and spent her formative years there learning to love books at her grandfather's knee. When she was five, her mother remarried and moved them to Michigan, where they stayed for the next ten years. At age fifteen, the entire family moved back home to Arkansas, and she's been there ever since, except for brief stints in other countries and states while her hubby was in the army.

After receiving a BS in journalism from Arkansas State University, Katherine began her writing in earnest. To date, she's had seven books published, with number eight being released in April, 2009, and number nine just completed.

A member of Romance Writers of America, Katherine has achieved many awards for her novels, including the 2006 EPPIE award, winning the PASIC Book of Your Heart contest in 2002, and having a novel named Best Book of the Year by Romance Reviews Today in 2005. She currently writes for Eos, the science fiction imprint of Harper Collins Publishing.

Katherine Allred kicks off the series of guest author posts for Parallel Universe with the following artful appellation article:

What's in a name? That which we call a rose
By any other name would smell as sweet; 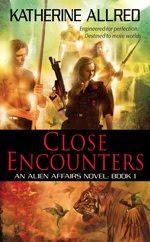 Shakespeare might have rethought those famous words from Romeo and Juliet if one of his characters had been an alien. The hardest thing a science fiction writer has to do (after creating a plot, believable characters, and realistic world-building, of course) is come up with alien names that a human reader can pronounce. I’ve lost count of the times I’ve seen readers complain about names like Qz’aaaarxeul. And believe me, I’m on your side. I hate those type of names, too. Anne McCaffrey is the only writer I’m aware of who has ever used the apostrophe to good effect in names.

On the other hand, you can hear the screams all the way to Alpha Centauri if we give a slimy, green, bug-eyed monster an earthling name like Jim. After all, no self-respecting slimy, green, bug-eyed mother monster would ever name one of her offspring Jim. She’d name him something completely unpronounceable to earthlings, which brings us right back to where we started.

It’s a fine line authors walk between believable and outrageous in our attempts to make everyone happy. And to add even more pressure, it seems we now have to worry about what our choices will do to the next generation of children here on good old Earth. According to an article in Australia’s The Herald Sun, parents are taking names from science fiction for their offspring. “There have been 18 Neos, 133 Xanders, 273 Trinitys and 158 Willows born in Victoria since 1980.” 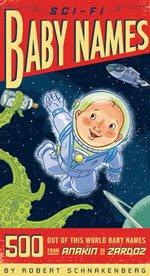 If you’re expecting and names from Buffy and The Matrix don’t do it for you, never fear. Robert Schnakenberg has compiled a book of Sci-Fi Baby Names: 500 Out-of-This-World Baby Names from Anakin to Zardoz, available from Amazon.

With the mental health of future generations in our hands, what’s an author to do? After thinking it over, I searched the web for a name generator that might take some of the weight off my shoulders. The pirate name generator wasn’t a big help. It dubbed me Red Mary Flint, which doesn’t really sound all that alien. Then I found Behind the Name. One push of the button yielded Baqir Tomi. Now we’re getting somewhere. Just to be sure, I hit the button again and got Mamadou Kalev. I think we have a winner. I’ll be saving this site for naming quandaries on my next books.

Curious as to how other authors handle this problem, I decided to ask a few. Cheryl Brooks, author of The Cat Star Chronicles, says she tries to make the names as feline sounding as possible. “I might put in anything at first—a common name or even a description—and then change it as the character develops. Other times I just hit random keys on the keyboard and then add or change the vowels until I get something that sounds right.”

Anitra Lynn McLeod has a similar style: “I take ‘real’ names and words and move the letters around or delete letters. For example, in WICKED HARVEST, the heroine, Enovese got her name from Genevieve, my aunt. Chur was part of churlish because my hero can be rather churlish at times.”

Eileen Wilks, best selling author of the paranormal/urban fantasy series, THE WORLD OF LUPI, says “I usually prefer one or two syllable names to make it easier for readers to remember them. In most cases, I look for combinations that sound like they should be a word or a name already. One of my favorite ways to jump-start the process is to play a game called Word Warp. Word Warp gives you a six-letter word, but it's warped, the letters out of order, and you can warp them over and over. The object of the game is to make words from those six letters—but when I'm name-hunting, I warp it until I get something that sounds like it ought to be a word (or a name), but isn't.”

Personally, in CLOSE ENCOUNTERS I took the easy way out. Because my aliens had names that were unpronounceable, I let the human heroine give them nicknames. In book two, CLOSE CONTACT, the characters are all descended from Earthlings so there wasn’t much problem with names. However, now that it’s time to work on book three I’m in desperate need of names for three dragon birds and Qz’aaaarxeul isn’t an option. Maybe I’ll head on over to Behind the Name and see what they come up with.