EARTH GIRLS ARE EASY (And Other Deep Thoughts) 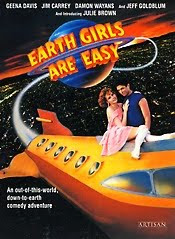 I watched this film just one time, right after it first hit home video. As a result, my memory is as fuzzy as the fur on the aliens in that flick. At the time, I felt obligated to see it as an SF fan, more so than from any real interest. I recall it as a roller coaster of sexy, campy fun, and to the film’s credit, it didn’t aspire to anything more. (What do you expect from something based on a Julie Brown song—80s high-concept or a New Wave MACBETH?)

For the uninitiated, the basic plot doesn't exactly aspire to rival Lars von Trier: “A spaceship with three furry aliens lands in a California girl's swimming pool, so she makes friends with them.”

Yep, that pretty much covers it.

Now when it comes to films like EARTH GIRLS ARE EASY, you either go along for the ride or just fuhgetaboutit. There’s almost nothing to poke fun at because the film pokes fun at itself. It’s almost pointless to criticize such lowbrow fare—no matter how titillating the neon pop of late 80s fashion, but regardless, I did have one beef with EGAE:

The aliens, Mac (Jeff Goldblum), Wiploc (Jim Carrey), and Zeebo (Daman Wayans) were only deemed attractive after stylist Candy (Julie Brown) removed their fur. It bothered me when I first watched the film, and a story I’ve been reading reminded me of it again.

But I must detour for a moment to gush over Jeff Goldblum. He was hot, hot HOT in this film. Volcanically hot. The man is an Adonis. The shallow side of me cheered in full pom-pom mode at the unveiling of his luscious bod. Let’s feast our eyes for a moment:

Okay, that was lovely, but now back to our show. At the risk of reading too much into EARTH GIRLS ARE EASY, it seems as though the homogenization & humanization of the three aliens symbolizes our deep-seated fear of the alien “other.” The film is a comedy yet it openly (but not deeply) explored that issue. The film tells us that bonding with a humanoid alien is kosher as long as they look exactly like us. For all we know, they had pink-colored blood or three hearts, but what mattered most was their outward appearance.

(As an aside, I heard that the Fox studio suits asked James Cameron to tone down the aliens in AVATAR in order to make them appear more human. Needless to say, Cameron won that particular battle. Thank goodness.)

On a related note, earlier this year I read Ann Somerville’s e-novella ON WINGS, RISING and I’m currently reading REACHING HIGHER. Both m/m stories are sensitive explorations of falling in love with an alien although I hesitate to even describe the characters with such a loaded term since the Angels are actually a race of telepathic winged humanoids. And yes, they have fur. Back, Candy, back!

Unlike the goofy, 4th grader rendering of otherworldly beings in EARTH GIRLS ARE EASY, Ms. Somerville takes the idea of interspecies love dead seriously. The portrayal is quite tender, and her detailed prose celebrates the Angels’ fierce beauty as well as their otherness. They become as seductive for the reader as they are to the human characters. Given the realism in these stories, it’d be horrifying to think about stripping these characters of their fur or molding them to some narcissistic version of ourselves.

EARTH GIRLS ARE EASY and the work of Ann Somerville represent two vastly different ways science fiction romance can depict interspecies love. Both show it can be done convincingly, albeit along wildly divergent paths.

What the film and Ms. Somerville’s stories also address is the issue of what constitutes attractiveness in a mate for the characters. I can wax poetic about Mac’s handsomeness but at the same time, I must question the assumption that his furred appearance is less beautiful than his non-furred state. Yet the “Earth Girls” found them attractive without fur so I have to accept that. It’s not a big stretch since the movie taps into my cultural expectations.

On the other hand, in a story such as ON WINGS, RISING, the author challenged me to put aside my sense of ideal beauty and suspend my disbelief regarding what the hero/hero thinks is ideal. Because it’s his romance, after all.