The Romance Heroine is Not a Side Dish

Regarding Love Romance Passion’s recent post, 6 Reasons Why the Paranormal Character is Always Male, I was intrigued by Keira's reason #2:

“Strong powerful hero + average heroine = swoon. When an extraordinary specimen of the male gender sits up and takes notice of a rather ordinary female it is easier to place ourselves in the heroine’s shoes. That’s not because we think of ourselves as unworthy, this formula just makes it more accessible for readers. This scenario also tends to fill the tenderness and protectiveness side of the fantasy.”

Keira's explanation prompted a lot of reflection on my part. I appreciate her break down because it, along with other online discussions I’ve seen, clarifies what the romance heroine means for many readers: that of blank template so the reader can imagine herself as the heroine.

I’m no exception to this function as I’ve read romances where the heroine becomes all but invisible, and I process the story in terms of what it’d be like to interact with the hero on the page before me. I’m referring to stories where the character development is clearly skewed in favor of the hero (because if a heroine is “average” or “ordinary,” what is there to develop?).

Frankly, I’m torn about this issue. I can understand the appeal, but on the other hand, I think it does a great disservice to heroines that otherwise might have been portrayed with a lot more personality and depth.


I think this “average heroine” template works better in some genres than in others. I can easily slip into the fantasy if I’m reading a paranormal or historical romance. Not so much if I’m reading science fiction romance or romantic suspense. In fact, my expectation for SFR is that the heroine is going to be just as flashy and filling as the hero, if not more so in some stories.

I certainly appreciate the challenge of rendering both an extraordinary hero and extraordinary heroine with equal measure. How does one compete with a suave vampire or glamorous space pirate heroine? The hero and heroine shouldn’t necessarily be competing with each other for the reader’s attention—or should they?

To be clear, I have a preference for heroines in SFR to have the “special” qualities, or at least special qualities that rival those of the heroes. I love anti-heroines, for example. I’m excited about the endless possibilities for heroines in SFR. Quite frankly, I don’t want them to be average heroines. I want to experience the heroine’s adventures along with her; I don’t want to be her. I envision these heroines as a living, breathing person—someone separate from me, not an excuse for me to fantasize about falling in love with a dashing starship captain. 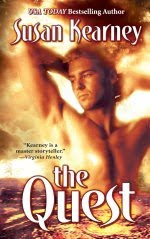 I recently finished Susan Kearney’s THE QUEST and the heroine is the captain of her own salvage ship. Boo-yah! The hero’s special quality was his psi ability. Both had something unique, strong, and powerful to bring to the relationship, and neither overshadowed the other (though I ultimately thought it was the heroine’s arc that stood out).

Many recent SFR heroines are exceptional and so perhaps my fear is that the trend won’t continue, or that it will fall victim to marketing departments that are only interested in pimping selling the "blank template heroine" to readers. I admit I have trouble relating to the desire for this fantasy in book after book after book, even as I’ve slipped into that mindset in the past.

I just want to feel as passionate about the heroines as the heroes…is that so wrong?