Parallel Universe: The Literature of Hope by J.C. Hay

Science-fiction, we are told, is the literature of hope – it’s about looking to the future and finding something worth hanging around to see. However, even the shiniest, most utopian future becomes as sterile as a spaceship corridor unless it has people to bring it to life. Real people, who live, grow and fall in love, rather than tour guides who exist only to show us how cool a piece of technology might be. That’s the real allure of science-fiction romance to me; I can read about the future in any number of ways, but through the vast diversity of SFR, that future is given a humanizing element. It is the admission that even in the darkest post-apocalyptic nightmare, there is a chance for two people to find each other and create a whole that is stronger than their individual parts.

Part of the appeal, as a writer, is the sheer scope of diversity that can be fit under the umbrella of SFR. At first glance, it looks pretty small; a subgenre of a subgenre. Then you get closer, and take a look inside. Like the Doctor’s TARDIS, there seems to be room for everything and everyone. Space opera and science fantasy sit side by side with dystopian cyberpunk tales and hard SF potboilers. Neon-soaked cyberpunk stories sit next to their kid brother, the Steampunk (who’s suddenly come out of puberty and is busy turning everyone’s heads). 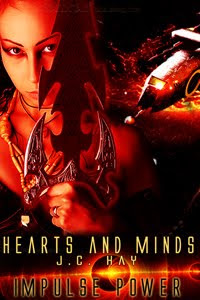 And then there’s the characters – certainly SFR has its share of Alpha heroes, but it also opens its doors to the Beta-hero. Indeed, Betas seem to thrive in the future where their emotional openness and ability to complement rather than take charge is welcomed. Strong, competent heroines command starships and stride across a landscape that they claim and shape for themselves rather than allow it to overwhelm them. Aliens, from the nearly human to the decidedly not so, serve to reflect those things we both love and hate within ourselves and help challenge the notion of what it means to be human.

Even more impressive than the genre’s explosive population is its openness to trying new ideas. E-reading devices have dropped drastically in price, and even the iPhone’s small screen can display a fair amount of readable text. Traditional publishing still dominates the market, of course, but right alongside is a thriving small-press market that makes significant inroads through the capabilities of new media. Audiobooks, and more importantly, eBooks are a significant part of the market, more so for SFR than for most genres. Hope for the future translates into a willingness to explore other methods of delivery, and the genre is richer for it.

More importantly, if this is the literature of hope, look at the future we have laid out –inclusive, welcoming, and full of warmth, humanity, and most importantly, romance. Because that’s the greatest hope of all, nested at the heart of SFR. That no matter how much everything changes, there’s still the possibility to find that love that makes it all worthwhile. That is the future we’re laying out for ourselves and for our readers.

It is a great time to be reading, and writing, SFR. It seems like every door is open and the future is laid out in lens-flares and shining chrome (or leather and brass, if you’re of a neo-Victorian mind). Every month, the list of SFR releases gets larger. The sheer wealth of diversity available to us as readers is enough to induce choice-paralysis in almost anyone. The surge in popularity of steampunk has brought a whole new set of readers to the table, and that can only be a good thing.
We aren’t just shaping the future with our stories, we are living in the future already. Judging by the stories we’re telling, it can only get better from here.

***
J.C. HAY writes, knits, and sometimes writes about knitting from a secluded location in the middle of the United States. J.C.’s SFR novella, Hearts and Minds, is available through Samhain Publishing, while short works can be found in Twelfth Planet’s Aurealis-nominated anthology New Ceres Nights, Crossed Genres and Apex Magazine. Part-time film snob and full-time foodie, J.C. spends too much time pushing friends into new experiences and not enough time updating the website www.jchay.com.