Parallel Universe: Dr. Rotwang or: How I Learned to Stop Worrying and Love Science Fiction Romance by Sheryl Nantus

"So, what is this steampunk thing all about? And what's science fiction romance, anyway?"

I've been asked that numerous times over the past few months as my steampunk western romance, "Wild Cards and Iron Horses", creeps towards release. And I know that for everyone there's a different answer, as there would be for any genre. If I say "romance" you have a different vision of what qualifies as "romance", as you would for "mystery" or "science fiction".

A thousand years ago (well, okay, maybe only forty or so…) when I was growing up in Toronto, Canada I discovered comic books and wonderfully trashy romance paperbacks, both in my household. I'd buy the comic books and my grandmother would pick up the romances, usually Harlequins that she could trade in at the local used bookstore for a nickel apiece. (I *said* it was a long time ago!) I'd bounce back and forth between the superhero romances (what was UP with Scott and Jean?) and "traditional" romance novels.

I also overdosed on television. My mother brags to this day about watching the original STAR TREK with me in her lap, hardly old enough to know what I was watching but I knew that Kirk was one darned fine looking man. Moving on, I discovered DOCTOR WHO, WILD WILD WEST, MAN FROM UNCLE, I SPY and a slew of other television series that, while technically not science fiction, sure held a lot of science fiction elements. 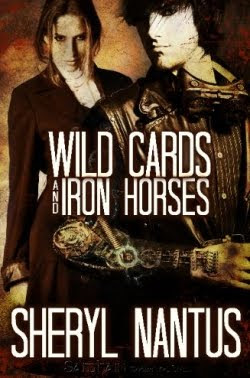 Who didn't look at those amazing gadgets from MISSION: IMPOSSIBLE and wonder how they were built? Or drool over the toys James West carried in WILD WILD WEST that were just so out of place in the old West but yet still in place – there's steampunk for you. And later on we had the original BATTLESTAR GALACTICA, LOGAN’S RUN, SALVAGE 1 and so many others that I can't remember them all.

But the one link that they all had, to me at least, was an underlying romantic element. Who would Apollo end up with? Why didn't Skip admit his attraction to Mel? And why, oh, why, didn't Malcolm Reynolds end up with Inara at the end of SERENITY???

BRISCO COUNTY JR. JACK OF ALL TRADES. THE SECRET ADVENTURES OF JULES VERNE. Need I go on?

I went running to the bookstore, looking for stories that would combine my love of technology and my lust for romance. This of course led onto such fine authors as Linnea Sinclair, among others, who took the science fiction romance and embraced it wholeheartedly. Did I mention Lauren Dane yet?

Suddenly I discovered that not only did I want to read science fiction romance, I wanted to write it. All I needed was an actual name to put to the genre and now I had it.

And now you have it. I'm willing to bet that if you look back on your television viewing habits or your reading choices that you'll find out that you've been a closet science fiction romance reader or writer all along.

Sheryl Nantus was born in Montreal, Canada and grew up in Toronto, Canada. A rabid reader almost from birth, she attended Sheridan College in Oakville, graduating in 1984 in Media Arts Writing.

During her fifteen years of working in private security she was stationed at the United States Consulate in Toronto; various Consuls' residences as well as many hospitals in the Greater Toronto Area. She received training in many fields, along with being certified to carry a firearm while working as an armed security officer.

She met Martin Nantus through the online fanfiction community in 1993 and moved to the United States in 2000 in order to marry. A firm believer in the healing properties of peppermint and chai tea she continues to write short stories and novels while searching for the perfect cuppa.