Ella Drake’s forthcoming science fiction romance SILVER BOUND from Carina Press will hit the virtual shelves November 22, 2010. Thanks to the author and publisher's generosity, my passengers have access to the official unveiling of the cover right now! Feast your eyes: 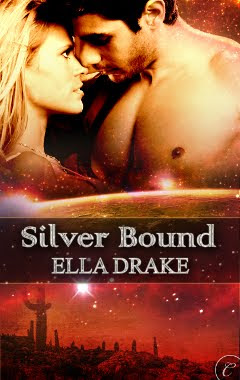 There’s the couple against a starry background! Good call. If we can’t have starships or other tech, at least stars and a planet help orient the potential reader to the setting. The cacti tell you it’s a space western, although I’d be surprised to discover that there are really cacti in the story. But maybe, just maybe, the cacti launch killer spores that transform into mutant space monsters. Kidding.

Back to the cover. To me, the color is warm and inviting. The stars echo the silver mentioned in the title, which is a nice touch. The couple’s pose promises a sensual love story (but I wouldn’t have complained in the least if the hero, who is a sheriff, wore a uniform. Picky, picky, I know. Although, it appears as though he might be wearing a holster.).

Overall, this is a solid step toward branding science fiction as a whole, at least as far as covers are concerned. What this cover says to me is that Carina Press embraces the hybrid story elements. Because it's an ebook, they can afford to target the niche audience. But the visuals have plenty of cross-over appeal as well.

And that’s not all, folks: Head on over to the Ella Drake’s site to read the newly revealed story blurb and excerpt!

Now that you’re back, what do you think about the latest addition to our current batch of SFR covers?