Caught in the Cover Crossfire: ENEMY GAMES by Marcella Burnard 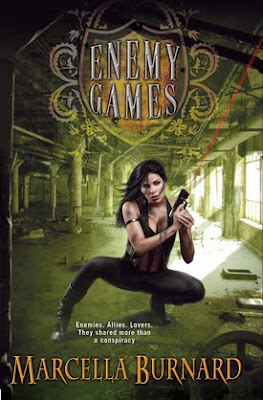 How about this cover for ENEMY GAMES, Marcella Burnard’s second urban fantasy science fiction romance? Thanks to the author’s generosity, we’re getting a very early sneak peek at the cover.

Naturally, I was very excited to see the cover, because it means we’re that much closer to another mainstream print SFR being on shelves. My first reaction, though, was wow, Berkley Sensation really wants readers to believe this is an urban fantasy at first glance because urban fantasy is hot right now. Makes sense, right? Sales should be strong and robust.

I’m trying to keep an open mind, so here are what I think are some of the cover’s positive qualities:

* The cover is professionally done

* The overall theme is consistent with the author’s first book, ENEMY WITHIN

* The setting is gritty, and connotes action-packed adventure

* It features a strong, kick-butt heroine

* Her body language is sending an enticing invitation to heterosexual male readers, which might result in more guys giving science fiction romance a try

* She’s holding some kind of laser gun and she’s firing it (hopefully at the villain, heh heh).

* At least the heroine isn’t sporting a tat, which is one of the big codes for UF

Is the cover for ENEMY GAMES a cause for celebration? Frankly, I’m torn. As we well know, science fiction romance authors are no strangers to publisher attempts at disguising the subgenre. It’s one of those “that’s the reality of publishing” situations. On the other hand, sacrifices have to be made in order to draw new readers to what is still a niche subgenre. If an urban fantasy cover helps sales, who am I to complain?

But the cover for ENEMY GAMES so blatantly screams urban fantasy that I must question what will be accomplished by such skullduggery. The last thing we want is a bunch of upset urban fantasy readers who might otherwise have given science fiction romance a try without such obvious lure tactics. Unless, of course, those same readers come and tell us that their expectations are simply for a good story, regardless of whatever subgenre is between the covers.

On a related note, Smart Bitches recently had a post (Poll: When the Cover Matches the Contents) on the cover-story disconnect. In that thread, readers were primarily discussing how the cover models frequently look differently than the characters. In the case of ENEMY GAMES, seems like the entire subgenre is off. Perhaps someone didn’t get the memo that the story is a science fiction romance. Either that, or something was lost in translation. Take a look at the background: I’d be surprised if the story takes place anywhere inside an abandoned warehouse.

Still, I appreciate the fact that there’s not a half-naked, headless hero on the cover. Even though the art department seems to have traded paranormal romance for urban fantasy, at least the weapon is a step in the right direction. And despite everything, I’m definitely excited about starting this series.

That’s my take on the subject. What’s yours?