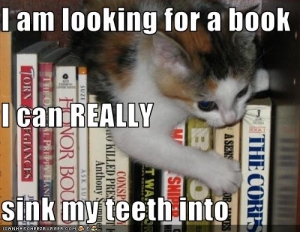 One person, Cbackson, in response to a recommendation of Lois McMaster Bujold’s SHARDS OF HONOR, said

I feel like the standard recommendation is always Cordelia’s Honor or another Bujold....

Based on my own experience (in terms of recommendations given by me and those I’ve witnessed), I feel that there’s some truth in the observation that CORDELIA’S HONOR has become a “standard” recommendation.

There’s a reason readers recommend Ms. Bujold’s work so frequently. She’s a brilliant storyteller. Given her skillful blends of SF and romance, as well as her longevity, her books have become a gold standard for SFR.

That said, there are pros and cons to having such a gold star doing all the representin’.

On the one hand, it feels good to turn readers on to some of the best work SFR has to offer. On the other hand—and I say this with all due respect to Ms. Bujold—she’s not the only author writing quality SF-romance blends. And as scandalous as it may sound, not every SFR fan is looking for her type of stories.

Cbackson's comment demonstrated that SFR still doesn't have near the visibility we want for it, especially if the standard recommendation hasn’t become one of the many print sci-fi romances released since SHARDS OF HONOR in 1986. Or for that matter, a digital-first title.

Did SFR take a wrong turn? Is quality alone a factor? What about longevity?

Take Sandra McDonald. Ms. McDonald wrote a military SF trilogy driven in significant part by the romance (THE OUTBACK STARS; THE STARS DOWN UNDER; THE STARS BLUE YONDER). She doesn’t have the longevity of Ms. Bujold in the SF-romance arena (or, say, Linnea Sinclair ), but her trilogy is as much SFR as the aforementioned authors (and as entertaining).

I’m not surprised that THE OUTBACK STARS trilogy isn’t mentioned as much as CORDELIA’S HONOR, but I am surprised that it’s not referenced at least as much as the work of Linnea Sinclair. Or does this example demonstrate just how crucial a strong marketing campaign is, especially when one is up against genre giants like Ms. Bujold?

Given this visibility challenge, should we re-examine our approach to hand-selling science fiction romance titles?