Jessa Slade Dishes About HOTTER ON THE EDGE, A New Sci-Fi Romance Anthology, Plus Giveaway 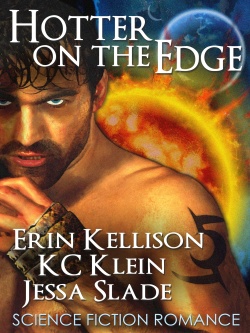 Check this out: authors Jessa Slade, KC Klein, and Erin Kellison banded together for HOTTER ON THE EDGE, a science fiction romance anthology. Well done, Ladies!
I learned about this anthology while on Twitter, so needless to say I am loving what these social networking sites are doing for SFR.
And it gets better: HOTTER ON THE EDGE is only 99 cents at Amazon, Barnes & Noble, and Smashwords! The authors informed me that this is a limited time price, so grab yours before the cosmic winds drive this sweet price away.
Here’s the lowdown on the stories:

All That Glitters by Erin Kellison

Cheated out of a fortune by the Sol royal family, lowborn Simon Miner will do anything to get his revenge, no matter how ruthless. When Princess Mica Sol, a terraforming expert, is shot out of the sky on the way to her sister’s lavish wedding, she fears the worst—scavengers—and flees into an alien jungle to avoid capture. But the man who pursues and captures her is none other than Simon, her former lover. Passions reignite as violence rocks Sol City, and Simon and Mica must fight for love, family, and their world… or lose everything.

To Buy a Wife by KC Klein

In a harsh land where corruption rules and women are few, cold realist Hudson Land must purchase a wife to save his farm. Instead of an auction, he witnesses the start of an execution. With his first look at a beautiful woman in years, Hudson knows he has to have her—no matter the cost. Lake, a chemist and a rebel fighter, is resigned to her death, but when some back-hill farmer rescues her from the chopping block she has no intention of simply becoming his wife. She’s pledged her life to the Rebellion and being bought for some stranger’s bed doesn’t change a thing, though his soft caresses have her longing for more. As lies and secrets build between them, are the quiet moments during the nights they’ve shared enough to stand against two warring factions in a world where only the strong survive?

Enslaved by Starlight by Jessa Slade

Transformed by empathic crystals into the perfect paramour, Benedetta Galil is the last treasure of her fading world. When raiders attack—seeking to corrupt the crystals and conquer all of charted space—she gives herself as a prize to the one man in the universe who values freedom over power. Mercenary sheership Captain Corso Deynah left oppression behind him on a burning planet and has no use for a sex slave, even one as seductive as Benedetta. But while he stubbornly resists her body, her fierce spirit tempts him, and he will risk everything—his ship, his seclusion, the very stars—to win not just her passion but her love.

Jessica Slade generously answered my questions about this project so that I could share even more information with you. Following the interview is a giveaway of KC Klein’s sci-fi romance, DARK FUTURE, so read on!
The Galaxy Express: How did HOTTER ON THE EDGE come about?
Jessa Slade: I was sleeping with Erin Kellison (it was at a romance convention and these things happen) when she mentioned that she and her critique partner KC Klein had been contemplating writing novellas for an anthology. Well, you can't say "What if...?" among writers without starting something, and before we knew it, we had HOTTER ON THE EDGE.
TGE: The three of you had your pick of romance subgenres. Why science fiction romance?
JS: I think I'm going to blame KC for that one :) KC's first book – DARK FUTURE with Avon Impulse—was a sexy futuristic time travel romance. While Erin's SHADOW series with Kensington and my MARKED SOULS series with Signet Eclipse were more paranormal/urban fantasy romances, the crossover to science fiction romance is a very short step. That's one of the thrills of worldbuilding: You can go offworld with just a flick of your imagination.
TGE: Please list 3-6 brief tags for each story.
JS:
"All That Glitters" – adventure, wedding, scavengers, princess, royal, lovers
"To Buy a Wife" – gritty, rebellion, post-apocalyptic, sword fight, tattoo, secrets
"Enslaved By Starlight" – Han Solo. James T. Kirk. Malcolm Reynolds.
Need I say more? 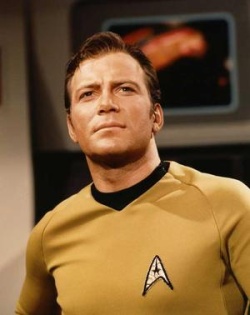 TGE: What kind of heat level can readers expect from this anthology?
JS: Somewhere between Venus hot and solar flare hot ;) We won't rudely incinerate you on the spot, but we will melt your forward shields.
TGE: What kind of work was involved regarding putting this anthology together?
JS: There was weeping. There was swearing. There was tearing of hair. This was a first self-publishing adventure for all of us and we wanted to learn more about the process. It's a lot of work creating a story, and it's a lot more work after that to create a book. Just to give you an example, finding a hot guy for the cover was a frustration. The image had to represent each of our heroes and the mood of the anthology as a whole. There is a lot of bare chestage on the stock image sites, but it has to be the RIGHT bare chest!
TGE: Is there anything else about HOTTER ON THE EDGE that you'd like to share?
JS: This is more a question for your readers. I've always written–and read–longer books, but I'm coming to appreciate the pleasures of novellas. Sometimes when I'm busy, knowing I can sit down and read a shorter story and get quickly to my Happily Ever After is exactly what I want. Other times, I really want a long, immersive read. I'm wondering how your readers feel about the various lengths of stories. Do you like a certain length more than others? Do you like to mix it up?
Thanks for giving us the chance to share with you!
***
Ms. Slade, thank you for sharing the exciting news of this release with us! 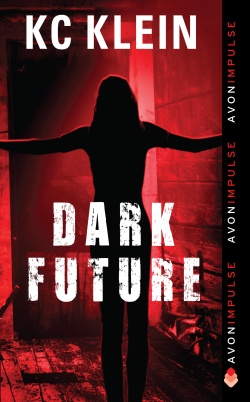 Now for the giveaway! One lucky Galaxy Express passenger will win a digital copy of KC Klein’s DARK FUTURE.
To get you in the mood, here’s the story blurb:
Awakened in the middle of the night by a future version of herself, Kris Davenport is given a mission: go forward in time to save the world—and His life. Of course, her future self doesn't tell her who he is, just sends her into an abyss and straight into an alien invasion.

He turns out to be ConRad Smith, the callous, untrusting Commander of Earth's army and the world's last defense. There's only one way to know for sure if this strange woman is an alien spy—slice her throat. Except, he didn't anticipate the heat he would feel as he interrogates the hot-tempered, warm-blooded woman. For a man whose sole focus has been survival, she's more temptation than he can handle. But a world on the brink of destruction leaves no room for love…and time is running out.

The deadline to enter is 12 midnight EST on Saturday, February 11, 2012. Winner can choose from a Kindle or Nook-compatible format.
To enter, share your preferences as far as story length in the comment section. Or dish on what you’d do with Malcolm Reynolds if you had him alone in a luxury shuttle. (Guys, you can play, too!!)
Joyfully yours,
Heather
Posted by Heather Massey at 8:32 PM
Newer Post Older Post Home
View mobile version