Every now and then I read a book and think to myself: Ooh, I HAVE to get Heather’s take on this. We don’t always agree (in fact, it got me killed one time), but the discussions are always so much fun. SPARKS IN COSMIC DUST, a recent book by Robert Appleton, had me running to the computer to e-mail Heather. A wonderful book chat ensued. This is not a review; rather it’s an analytical discussion about certain elements that we realized affected us both in similar ways.

Beware The Massive Spoilers, including the ending. You have been warned! – Diane Dooley 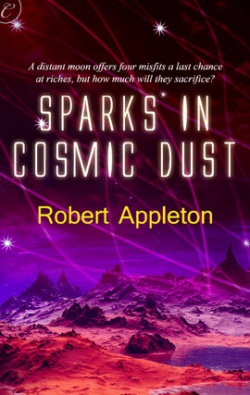 Diane: I recently read Robert Appleton's SPARKS IN COSMIC DUST. It kind of confounded me at the time. I enjoyed it very much, but it set off all kinds of bell-ringing in my head. Having been thinking about it for some weeks now, I've finally settled in some strong opinions about it. I hereby declare this the most unusual science fiction romance I have ever read.  It's not being marketed as an SFR, but that ending? A classic romance ending, if ever I saw one, complete with domestic bliss and adorable child. What do you think? There's no doubt 'Sparks in Cosmic Dust' is science fiction, but do you agree that it is also a romance, albeit it a very unusual one?

Heather: Yes, yes I do. The unusual aspect arises from the fact that SPARKS IN COSMIC DUST takes a number of risks in terms of the romance. I’m not surprised that the book isn’t being marketed as sci-fi romance because having read it, the science fictional elements drive the plot more than the romance. This book is more accurately classified as romantic SF. However, the romance does play a role in the outcome.

With this story’s ensemble cast, it’s important to distinguish between romantic entanglements and romance romance. There are a few characters who connect romantically, but various things happen along the way to derail the relationships.

As you know Bob Diane, the story involves four main characters who join Grace, a grizzled old female prospector, on a dangerous mining mission, trying to strike it rich: Varinia Wilcox, Clayton Barry, Lyssa Foaloak, and Solomon Bodine. Initially, Varinia hooks up with Solomon and Clayton hooks up with Lyssa. But only two of them become the main HEA couple.

But more on that later. I’d like to touch upon one of the risk-taking elements in SPARKS IN COSMIC DUST. Having blogged about the book and the film it pays homage to, THE TREASURE OF THE SIERRA MADRE, one detail in particular struck me about this story: None of the characters are particularly sympathetic. Likeable? Yes (particularly Grace). But do they evoke sympathy and invite the reader to root for them? Yes and no. 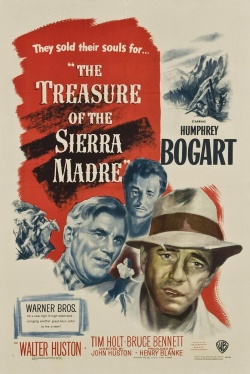 Upon seeing THE TREASURE OF THE SIERRA MADRE, this element made more sense because in the film, Humphrey Bogart’s character Fred C. Dobbs is a complete asshat. He’s unsympathetic—for a reason—and has no interest in redeeming himself. In SPARKS, some characters are more sympathetic than others, but I thought they all had a whiff of Dobbs in them. This is a factor that hints at the uglier side of human nature and also strongly impacts the romance. Was this authorial intention at work? Difficult to say, but that was my impression.

Speaking of romance, what did you think about the one that develops between Varinia and Clayton?

Diane: It made me so mad! Not so much at Varinia, but Clayton was lucky not to get a severe thrashing from me. Varinia’s relationship with Solomon never seemed liked a love match to me. She was in a desperate situation and latched on the first seemingly nice guy that crossed her path. I understood that. I accepted it. But for Clayton to prefer Varinia to Lyssa made no sense to me. Lyssa was fierce and tragic and loved Clayton with the kind of ferocity that no man should take for granted. And then when Lyssa had to die so Clayton could pursue Varinia’s beautiful face and bouncing boobies? Agh!

I got over it, though. Clayton and Varinia made a good couple. It felt right. But I’m still angry on behalf of Lyssa. She didn’t deserve that. But this is not a typical romance novel. As you said earlier, the uglier side of human nature is on full display in this story and though I was angry about poor Lyssa’s fate, I wasn’t surprised. Varinia is apparently one of the most beautiful women in the galaxy and, in a romance definitely written from a male POV, it didn’t (sadly) shock me that Varinia’s beauty was more highly prized than Lyssa’s love and loyalty. Clayton’s overwhelming physical attraction to Varinia always meant that Lyssa was going to get the shaft. At least she died before having to see Varinia and Clayton together, which is more than can be said for the reader.

Which brings us to that sex scene; the one Smart Bitches reviewer, CarrieS. called “the sex scene from Hell.” Heh. The review was very amusing and is worth checking out. But I don’t know if I entirely agree with her. I’ve got a few things to say about that sex scene, but I know you do too, Heather. Imma gonna let you go first *grin*

In all seriousness, I couldn’t agree more about Lyssa. She’s a great character and I would have liked to see more of her even though I understand what her role was. And what does it say about love and romance when a woman with an edgier personality and skills and less standardized beauty is passed over in favor of a supermodel? As a non-super model woman, I related to Lyssa much more than Varinia, even though the story features many more scenes from Varinia’s point-of-view.

I would venture to say the author’s approach might even be social commentary on the role of physical attraction in romance except for the fact that Varinia and Clayton were rewarded with an HEA. In a more traditional romance, Lyssa might have emerged as the heroine—the ugly duckling winning true love over the princess—but in SPARKS IN COSMIC DUST, Clayton is depicted as the real winner because he gets ripped abs (from the mining), wealth, and the princess in the end.

With that in mind, let’s unpack the sex scene between Clayton and Varinia. One of the main impressions I had was that the sexual positions reminded me distinctly of those one might find in a pornographic film. In other words, positions that are not only what a man having sex would consider highly enjoyable, but also a male reader. While reading those passages, I felt as if I were being invited to approach sexual intercourse as a man would.

I didn’t think it was a sex scene from hell, either. Rather, I wondered if it was a subversive approach to a love scene in a romance. In other words, is it a choreographing of a sex scene that reflects optimal sexual positions for a man? I mean, why not? Why couldn’t there be romances with love scenes that deliver a female fantasy lover for male readers (and female readers who want something different)?

One particular detail derailed the subversion angle for me, however, and that was the fact that Varinia seemed little more than relationship/sex fodder, first for Solomon and then for Clayton. She certainly had a say in the matter, but at times she seemed defined by whether she was attached to a man or not. Frankly, if Varinia had struck out on her own at the end (something I did start to expect at one point), I would have been giving her a standing O.

There is a certain reason Varinia feels attracted to Clayton more than Solomon, but it appears late in the romance development and also has less to do with compatibility than external science fictional elements. It’s actually a soul mate element, but I would have liked to see it foreshadowed earlier in the story.

Diane: My take on the infamous sex scene is that it was different from a typical “female gaze” sex scene in a romance novel, but interestingly so. It starts off as a physical altercation that quickly turns into a rough sexual encounter. At first I thought it was a bit rapey, but then Varinia starts to take the lead. By the time it switches to Varinia’s POV it’s clear that this is the kind of sex she wants. She even rather kindly “helped him pinpoint her sweet spot” to ensure she got what she wanted. By the end of the sex scene Clayton is flat on his back and Varinia is completely in control.  I didn’t think it’s any better or worse than sex scenes in a multitude of romance novels, complete with euphemisms and florid prose.  Par for the course, really.

With the whole definition of Varinia as “little more than relationship/sex fodder” I do think she came off as a trophy. That's what's so interesting, though. It's a pretty accurate depiction of the whole trophy woman thing. Clayton did see her as something glorious for him to win, to have, and eventually enjoy his happy ever after with. Personally, I wished he had spent a bit less time admiring her magnificent rack and a little more time exploring her interesting brain. She was one smart cookie, a tough survivor and nobody’s fool. By the end of the book she has everything she ever wanted.  Don’t trophy wives deserve a happy ever after too?

Final thoughts: I thoroughly enjoyed the world building. Appleton created a gritty and desperate universe, stocked it with a plethora of interesting characters and wrote his story with verve. I loved the character of Grace. She made me wish for more characters like her: wise, witty, tough, and well past middle age. The book made me stop and think several times, it made me angry at times, it made me laugh quite a bit. Its controversial and unusual elements only made it more enjoyable for me. That’s how I roll, I’m afraid.

Final thoughts from you?

Heather: I agree about Grace and therefore will take this opportunity to express my wish for a science fiction romance with someone like her as the heroine. Varinia may be one of the Beautiful People, but meeting Grace only solidified my interest in underutilized, off-the-beaten path characters.

Regarding Varinia as a trophy, I’m still not sure if her status is a deliberate attempt to show how cutthroat their situation was (e.g., every man for himself—grab as much as you can whether it be wealth or women) or if it was just a bit of regressive characterization. However, I agree that she’s a smart trophy as opposed to a dim bulb one.

SPARKS IN COSMIC DUST is not a light and fluffy adventure, that’s for sure. The story invites one to contemplate how the drive to become rich/escape poverty can twist a person’s soul. I’m not sure I felt uplifted by the end, even with the HEA, but on the other hand, with this tale I’m not sure I wanted to feel that way. And that’s not necessarily a bad thing.

Dooley: Let’s play the readers out with the music from one of my favorite scenes in ‘Sparks.’ The crew are about to blast into hyperspace when they decide they need some music. Cue Tom Jones!