Author Pauline Baird Jones (KICKING ASHE) kindly sent me a link to a very interesting article (with video) about “Bottom of the Ninth,” a totally rad iPad App: 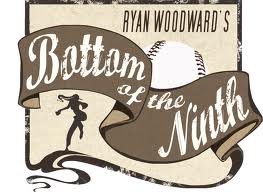 [Ryan] Woodward has just launched the first animated comic book of its kind – a graphic novel built as an iPad App that comes to life with animation playback right inside the digital pages.

“Bottom of the Ninth” tells the story of a young female pitcher making her debut in a future version of baseball by using a traditional comic layout enhanced with fully animated 2D and 3D animations. With the swipe of a finger, readers can flip pages or play short videos inside story frames.

Woodward is part of the team behind THE IRON GIANT and THE AVENGERS so you know this project of his is going to be cool—especially since it features a female protagonist! Fingers crossed that this venture opens the door wide for animated comic books of all kinds.

Anyway, my first thought after digesting this news was “Please, please will someone make a science fiction romance story in this medium?” OMG that would be so thrilling!


With the right project (near-future SFR? cyberpunk romance? steampunk romance?!), this is exactly the type of medium that could help sci-fi romance penetrate mainstream markets. An SFR animated comic book represents the type of out-of-the-box approach that I’ve been dying to see happen for this subgenre. 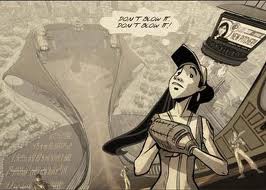 Naturally, there’s a rub attached. Despite loads of potential for such a project, how in Buddha’s blue universe can we make that happen? At the very least, it’ll take connections—lots and lots of connections. And also networking and collaboration of massive proportions. Easy peasy, right? :P

Then there’s the question of financial backing, not to mention who would be willing to take the risk (and don’t forget, all the glory, too—heh!).

Still, it seems to me that the time to get in on this type of venture would be now, to strike while the iron is hot.

And yet…this is where I start to get depressed because dang, the chances of experiencing an animated sci-fi romance graphic novel in my lifetime could be extremely small. I get all achy in my chest, grieving over something that might never come to pass.

Trust me, if I had the money, I’d fund one in a second. At the very least, if a bona fide science fiction romance came out in the form of an iPad app a la “Bottom of the Ninth,” I would buy an iPad just so I could devour it. And I would shout about it from the hilltops.

Despite the multitude of obstacles, I remain forever hopeful that Ryan Woodward’s innovation could yet open doors currently closed to SFR—if not in my lifetime, then during that of the next generation.

What do you think about animated graphic novels? Would SFR stories in this medium interest you? If so, what kind of interactive experience would you like to have?