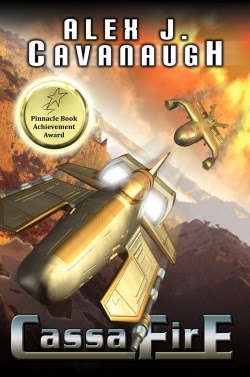 Author Alex J. Cavanaugh alerted me that CASSAFIRE, one of the books in his Cassa space opera series might appeal to sci-fi romance readers, so I invited him aboard to share some information with us!

Based on my reading of the first few chapters (which focuses on the main protagonist and setting up the story) and my email exchange with the author, I'd characterize CASSAFIRE as romantic SF.

Below you'll find the blurb, non-spoiler tags provided by the author, a brief excerpt, and the book trailer. I don't normally feature book trailers here, but this one is professionally animated and includes the heroine, which lends it a light SFR flavor. I also think it has an effective, tight focus. (Per Mr. Cavanaugh, the software used to create the trailer included 3D Studio Max, ZBrush, and Photoshop.)

At any rate, peruse the information to discover if CASSAFIRE is up your alley!

From the Amazon Best Selling series - CassaStar was just the beginning…

The Vindicarn War is a distant memory and Byron’s days of piloting Cosbolt fighters are over. He has kept the promise he made to his fallen mentor and friend - to probe space on an exploration vessel. Shuttle work is dull, but it’s a free and solitary existence. The senior officer is content with his life aboard the Rennather.

The detection of alien ruins sends the exploration ship to the distant planet of Tgren. If their scientists can decipher the language, they can unlock the secrets of this device. Is it a key to the Tgren’s civilization or a weapon of unimaginable power? Tensions mount as their new allies are suspicious of the Cassan’s technology and strange mental abilities.

To complicate matters, the Tgrens are showing signs of mental powers themselves; the strongest of which belongs to a pilot named Athee, a woman whose skills rival Byron’s unique abilities. Forced to train her mind and further develop her flying aptitude, he finds his patience strained. Add a reluctant friendship with a young scientist, and he feels invaded on every level. All Byron wanted was his privacy…

Aware he needed to assist Athee with her harness, Byron stepped away from the door. Unable to locate her, he frowned. The other two passengers were secure in their seats and gave no indication as to her whereabouts. Alarmed, Byron peered into the cockpit. Athee sat in the co-pilot’s seat, her harness in place and eyes scanning the control panel. Concerned, he entered the cockpit. She looked up and smiled.
“Your controls still amaze me,” she said, her eyes reflecting childish wonder. “So much information to process.”
Hesitating, Byron grasped the back of her seat. “You’ve been in a shuttle before?”
“Of course. The previous shuttle pilot even gave me a ride over the valley.”
I bet he did! Byron thought, staring at the attractive woman. “Well, you need to go take a seat with the other passengers.”
Athee tossed her hair aside and eyed him expectantly. “I thought I’d ride in the cockpit with you.”
“That’s probably not a good idea.”
“Why not?”
“That’s the co-pilot’s seat.”
“Do you have a co-pilot?”
“Well, no…”
“Then this seat is open.”

CASSAFIRE is available at Barnes & Noble and Amazon.

ALEX J. CAVANAUGH works in web design and graphics. He's experienced in technical editing and worked with an adult literacy program. A fan of all things science fiction, his interests range from books and movies to music and games. Online he is Ninja Captain Alex and founder of the Insecure Writer's Support Group and website.