D.J. Davis' WHILE YOU WERE AWAY: An Action-Adventure Sci-Fi Romance


I read D.J. Davis' WHILE YOU WERE AWAY (Red Sage Publishing) and the story lends itself nicely to tagging, so I decided to list some non-spoiler ones for you!

But first, here's the cover and blurb: 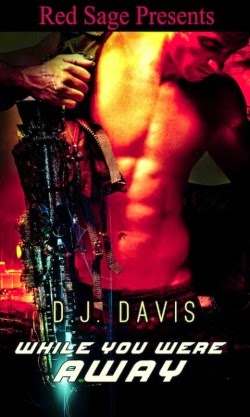 In the midst of chaos, the two meet once more and their love for each other becomes a raging fire of passion hotter than the sun, an unstoppable force. Hope for their future together rekindles, along with desires long pushed aside. A plan is hatched to take to the stars, bringing the remaining members of Libertas and their families to a place where they can live in safety, far off the grid, if they can just evade evil forces and get off the rock—a task easier said than done. But will they succeed in starting a new life beyond Tetraparagon rule or will they live out their remaining days in hiding from a hand that stretches into the very black of space?

Below are my tags for this story so you can explore if it's up your alley!

* The tech and weapons are described in nice detail, much as one might find in a non-romantic SF story. The opening scenes deliver a nice immersion experience.

* Hero and heroine are very heroic in an earnest way. Mainly what comes to mind is that they're super nice people of the friendly neighbor sort. WHILE YOU WERE AWAY will appeal to readers who enjoy "good guy" and "good gal" heroes with little angst. It's an easy SFR to unwind with after a long day of work or child rearing.

* Conflict between hero and heroine is pretty much nonexistent (which fit given how the reunification was framed), but the conflict between the couple and the external threat is high.

* Romance is one of reunited lovers. It has a flavor of "against all odds" reunification.

* Hero is an enhanced (superhuman) soldier and a smart one, too.

* Heroine Rianna is an ordinary woman who must learn freedom fighting skills in order to survive. Some aspects of her job are distasteful to her, but I appreciated that she didn't shy away from the hard decisions if the situation called for it.

* Dash of cyberpunk. The tech in question could easily be a bigger part of another book set in the same setting. There's also an interesting "black market" tech aspect to this story and I would happily read more like it in sci-fi romance.

* As the blurb indicates, the story has a dystopian setting with a "corrupt regime" taking over Earth. That aspect serves more as a backdrop for the action and romance. I wouldn't have minded if the politics had been explored in more depth, but your mileage may vary.

* The freedom fighter leader Terrill Briggs has a prominent role. Would make a good spin-off hero in a future book.

* Methinks there's a wee bit of a bromance happening between Kev and Terrill!

* The story has a number of military SF elements. It's a post-war period, so some of the military aspects/history serve mainly as backstory, but this could be a plus for readers who just want a hint of military SF.