Author KS Augustin has a forthcoming novel-length sci-fi romance called ENTANGLED (January 2015) and my dear passengers get the first look at the cover! 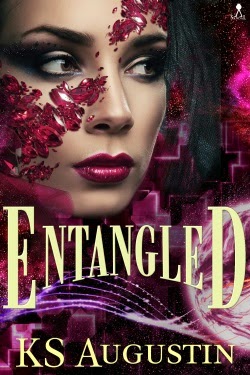 ENTANGLED will have a special release price of $3.00 if you purchase it at Sandal Press (the RRP $5.99 starts April 2015 at all major retailers). Here's the blurb:


In politics, is there a place for love?
The Rahfoni are negotiating a new treaty with a species called the Ithari. As a gesture of goodwill, the Ithari return the only Rahfon survivor—a species previously unknown to them—from a ship that crash-landed on their planet thirty years ago. It is now up to the Rahfoni to restore this young male to his species.
Rahfonist and renowned philosopher Van Motaff is nearing retirement and has been given the job of integrating the survivor back into Rahfon society. But between her and her goal stand planetary politics, a stern ex-husband, the social conventions of her planet...and the heart she's losing, bit by bit, to her much younger student. By the time everyone else gets what they want, what—if anything—will remain?