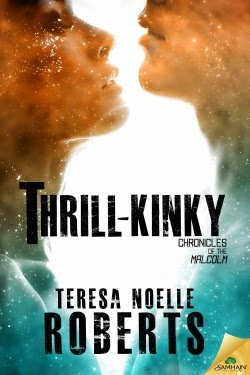 In sexual free-fall, the first one to let go wins.

Chronicles of the Malcolm, Book 1

Humans may have expanded to the stars, but they still have the annoying need to work for a living. Which is why Rita, crew member of the space freighter Malcolm, is stuck collecting recyclable slag rather than attending her favorite festival celebrating love and sexuality.

Things go from boring to interesting when she discovers a badly injured man who’s been thrown into a recycling bin to die. The catch, he’s gorgeous, winged, and naked.

Drax Jalricki, reformed (mostly) art thief and reluctant covert operative, is on an undercover mission to protect three planets when someone in his own government brands him a traitor. By virtue of association, Rita and her crew are going down with him.