Space Westerns: In or Out? 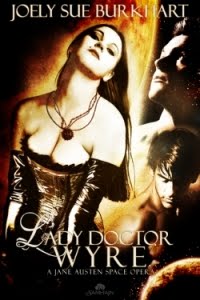 I recently finished Joely Sue Burkhart’s LADY DOCTOR WYRE. Even though the author bills it as “A Jane Austen Space Opera,” what struck me most about it was the space western elements. One of the heroes (this is ménage sci-fi romance) is the Sheriff of Queenstown on the planet Americus. Without going into spoilers, I’ll just say that a few other elements had a strong space western feel.

That got me thinking about the other three space western-style science fiction romances I’ve read over the last year: SILVER BOUND by Ella Drake, THIEF by Anitra Lynn McLeod, and SPARKS IN COSMIC DUST by Robert Appleton. SILVER BOUND also features a hero-as-sheriff; while THIEF is very much in Joss Whedon’s FIREFLY mode. SPARKS IN COSMIC DUST is an homage to the western film THE TREASURE OF THE SIERRA MADRE (I blogged about it here).
Speaking of FIREFLY, I’ve been revisiting that show on Blu-ray over the past 3-4 months (I last watched episode 9, “Ariel”). I’ve been watching it not just for entertainment value, but also to analyze it.
Actually, my history with space westerns goes back a long time. I’m a fan of Leiji Matsumoto’s Captain Harlock franchise, which often included space western elements (GUN FRONTIER is in my DVD collection). In Roger Corman’s BATTLE BEYOND THE STARS, the “Space Cowboy” character is among my favorites.
And let’s not forget SILVERHAWKS, an animated show I watched waaaaaayyyy back in the day. Colonel Bluegrass is the team’s pilot who wears a boss-of-the-plains and owns a guitar.
Therefore, it’s as a hardcore space western fan that I must ask the hard question: When it comes to science fiction romance, are space westerns in or out? Does the subgenre risk rehashing this setting to the point of diminishing returns?
It’s not like there’s a ton of them in sci-fi romance unless one counts stories with a space western feel. That is to say, stories with elements like face-offs, frontier life, nomadic heroes/heroines, or story structures that have been influenced by or have roots in the Western genre. Yeah, kinda like my own ONCE UPON A TIME IN SPACE. But how many of them can the subgenre sustain successfully? The reason I ask is that space westerns can feature highly stylized settings whose appeal may not always extend beyond core fans.
Let’s take a look at the iconic FIREFLY for a moment. One reason that show resonated so well with science fiction fans is that it was actually pretty hardcore SF. You actually had to pay attention to the worldbuilding. It wasn’t rocket science, but it wasn’t mindless entertainment, either.
On the other hand, I’ve been wondering a lot lately if the relentless space western imagery was an aspect that didn’t translate very well outside of SF fandom. Even I, who loves encountering western motifs in a futuristic setting, think that Joss Whedon got a little too happy with the western theme at times. And I still can’t figure out *why* practically every world the Serenity visits is steeped in the American Old West. I mean, other than for purely stylistic reasons (which is most likely the answer anyway).
It’s not that I would refuse to read or watch a science fiction romance space western; far from it. But I’m beginning to wonder how effective it is, story-wise, to transplant the American Old West into outer space (e.g., OUTLAND) without any kind of reinventions. And by reinventions, I mean things like explaining why the characters in a futuristic setting have adopted such a vintage lifestyle. There are times when I enjoy a space western that is purely stylistic, but as time passes, I’m discovering I’d prefer they have more depth.
One example of a space western element gone to the extreme (and perhaps jumping the shark) is from the video game STAR WARS: THE OLD REPUBLIC (Bioware, December 20, 2011). This game features a gunslinger character transplanted to the Star Wars universe.
To me, this was an example of trying too hard with the space western angle. Gunslinger dude comes across as a little too cool for school. I also questioned how he was able to survive in a laser gun battle and pilot a ship with a hat obscuring his vision half the time.
Watch it and you'll see what I mean:


So, yeah, I do worry about science fiction romance as coming across as trying too hard with space westerns. Or being like FIREFLY, where potential readers new to the subgenre are being invited to take on a double-whammy learning curve—those of science fiction and Westerns.
Sci-fi romance can still do a lot of fun things with the space western setting, not the least of which is to keep the tropes subtle. It also might be worth exploring finding more varied uses for Western themes/settings. For example, western steampunk romance, or a virtual reality in a cyberpunk world (I would totally read a WESTWORLD-inspired cyberpunk romance!).
Perhaps my true question to you is this: Must all space westerns in SFR be set in outer space?
Joyfully yours,
Heather
Postus scriptus: Since your day wouldn’t be complete without it, here’s a “Tribute to Bluegrass.”