HOPE’S FOLLY: Is it the Science Fiction Romance Breakout Novel? 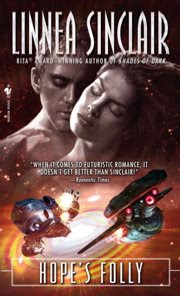 HOPE’S FOLLY is science fiction romance author Linnea Sinclair’s seventh book from publisher Bantam. Her writing career extends back over a decade—and that’s just regarding her “commercial genre fiction.” That’s an important distinction to make because rare is the author and/or book that becomes a success overnight.

I wasn’t looking for a science fiction romance breakout novel. At this point, I’ve simply been on the hunt for any SFR novel. Sure, I had been partial to the idea of a story featuring Admiral Philip Guthrie since his first appearance in Sinclair’s GABRIEL’S GHOST—especially since the author officially announced the project. But after finishing HOPE’S FOLLY, I realized that this book not only exceeded my expectations of a Linnea Sinclair book, it also contained myriad elements that would appeal to numerous romance readers, even those who had never read an SFR before.

This spoiler-free post is not a review or an endorsement of the book, nor do I intend to make a qualitative comparison to other SFR books (especially since you know how much I would love to read more steampunk romances and books featuring space pirate heroines).

Rather, I’m going to embark on a breakdown of several elements that are aligning to launch HOPE’S FOLLY as the potential breakout novel for science fiction romance. (And if I call it correctly, y’all owe me a bottle of Lashto brandy—each of you!)

I’m basing my assumption on the following factors:

This character driven story has a great balance of romance and political elements. It has the appeal of a forbidden romance while the mix of military SF and mystery provides even more layers of intrigue and excitement. HOPE’S FOLLY is also humorous in all the right places, thanks mostly to our man Guthrie.

Remember STAR TREK IV? Of course you do, because it was the highest grossing Star Trek film domestically. What made that film attractive to both fans and newcomers alike? Several factors: The accessible plot (the story takes place largely on Earth); the Star Trek elements were present without being ubiquitous; and the humor.

I think HOPE’S FOLLY does for science fiction romance what STAR TREK IV did for SF adventure films—it blends genres in such a way that readers will walk away feeling satisfied whether they come to the story from the SF or romance side of the equation. Romance readers take note: HOPE’S FOLLY is what one reviewer called “a personal romance-reading-changing experience.”

Usually, I don’t get attached to titles, but in this case I think the title is quite evocative. It offers a nice bit of foreshadowing and ties in extremely well to the book’s plot and themes. Not only that, but I’m a sucker for really cool ship names in fiction—starships, ocean vessels, airships—it’s all good!

Linnea Sinclair is a well known author in the subgenre—and also an author with a strong marketing platform. While other authors have also been writing SFR for years, and even decades, few have Sinclair’s online visibility. Her consistency is the vital ingredient: Consistent product, consistent covers (especially with the new ones), and consistent presence.

Which leads to my next point: Publishers invest in an author’s career in the hopes that one of the books will become a hit/bestseller. Naturally, they want it to be the first one, but that doesn’t always happen. It’s not something that anyone can predict. But having read the story, I think Bantam has something here, if they only recognize it. Linnea Sinclair delivered a definitive SFR novel, and the fan response has been overwhelmingly positive.

With HOPE’S FOLLY, let’s hope (!) Bantam gave it a high enough print run and spends some marketing bucks to make it a viable contender.

Proposition # 4: The timing is ripe

Is HOPE’S FOLLY a perfect science fiction romance book? To that I’d say, what novel is? There is a drawback in that this story is a spin off from an earlier book, and the hero’s character arc technically begins two books back. But not every reader starts with the first book in a series, and HOPE’S FOLLY works fine as a standalone.

The main point here is that HOPE’S FOLLY could be the key to unlocking the potential of other SFR novels—not because it’s necessarily a great example of the subgenre (which I think it is), but because it's striking a chord at the right time. This book transcends individual author branding—it has the potential to help brand the entire subgenre, the importance being how Sinclair executed all of the romance and science fictional elements.

Science fiction romance can and should comprise a variety of stories in a variety of settings with a variety of characters. But when it comes to attracting readers new to the subgenre, action-packed adventure with a dollop of humor is a bonus. Indeed, that factor might be preferable, because many readers enter the experience of a book for its sheer entertainment value.

The fun in HOPE’S FOLLY enhances both the romance and the SF elements. The relationship between Philip Guthrie and Rya Bennton is meaningful and warm but also playful. The linear, external plot has enough of a “comfort read” factor while also satisfying the vicarious thrill seeking needs of other readers. Finally, the worldbuilding details are complex without being complicated.

Want to know more? Here are some links:

The Good, The Bad The Unread

And now for a surprise!

I’m giving away a copy of HOPE’S FOLLY to one lucky passenger! All you need to do to enter is leave a comment. The deadline for the drawing is 8 p.m. on Sunday, March 29, 2009 (contest limited to U.S. residents).

Now I turn the microphone over to you. What do you think are the elements of a breakout novel for science fiction romance?