Despite the vast number of Internet sites devoted to both SF and romance, it seemed to me that Ms. Aguirre brought the book right to my doorstep, so intrepid and thorough was her marketing campaign. It also helped that she had the product to live up to the word-of-mouth that spread as a result of her efforts.

While it’s fun to track down elusive stories in the genre, it’s a downright luxury to have such tales at one’s fingertips. It makes spreading the love about SFR that much easier.

Hence, all this week, we’ll be celebrating author Ann Aguirre and her Sirantha Jax series. In addition to links and other information about the author and her work, I’ll be presenting an interview as well as an extra special giveaway.

I’d like to share my observations about the elements in GRIMSPACE that struck me the most (sans spoilers). But first, if you haven’t heard about Ann Aguirre or her space opera adventure that kicks off with GRIMSPACE, here’s a little background: 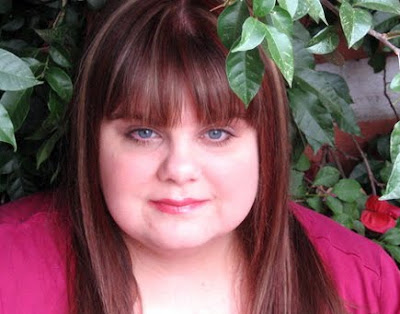 In her life, Ann has been a clown, a clerk, a savior of stray kittens, and a voice actress, not necessarily in that order. She grew up in a yellow house across from a cornfield, but now she lives in a terracotta adobe house with her husband and two adorable children. She writes romantic science fiction and urban fantasy under her own name. As Ava Gray, she writes high-octane romances.

By all accounts, Sirantha Jax should have burned out years ago…

As the carrier of a rare gene, Jax has the ability to jump ships through grimspace—a talent which cuts into her life expectancy, but makes her a highly prized navigator for the Corp. But then the ship she’s navigating crash-lands, and she’s accused of killing everyone on board. It’s hard for Jax to defend herself: she has no memory of the crash.
Now imprisoned and the subject of a ruthless interrogation, Jax is on the verge of madness. Then a mysterious man breaks into her cell, offering her freedom—for a price. March needs Jax to help his small band of rogue fighters break the Corp monopoly on interstellar travel—and establish a new breed of jumper.

Jax is only good at one thing—grimspace—and it will eventually kill her. So she may as well have some fun in the meantime…

So here’s what appealed to me about GRIMSPACE… 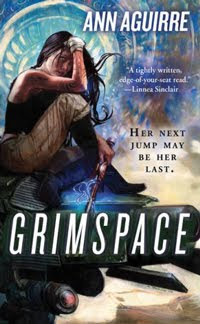 * Ann Aguirre has described her hero and heroine respectively, as “broken, damaged people.” Surly heroine Sirantha Jax meets long suffering hero March—what’s not to love? More importantly—and refreshingly—the story doesn’t flinch from portraying characters who frequently aren’t very nice, either to themselves or the people around them. All of which makes for good, solid conflict.

* The romance explores the themes associated with love the second time around. Part of Jax’s growth arises from her attempt to reconcile her past love with her current one, and this arc gives the story another layer of depth.

* Aguirre has described Jax as a “thrill seeker,” which is undoubtedly tied to Jax’s J-gene—her innate ability to navigate space ships through a wormhole-type dimension, i.e., grimspace. From the start, I found the title intriguing and evocative. Yeah, it’s another variation on hyperspace, but who’s counting?

* GRIMSPACE is very visual, so I wasn’t surprised to learn from the author that she “really wanted to bring that TV magic to books.” I’m a sucker for TV & film magic, especially if I can have it in books, too!

* The dialogue really stood out for me. Snap! Crackle! Pop! comes to mind.

* Another distinctive feature is Aguirre’s use of first person present tense. It worked great for me, and from reading various comments around the blogosphere, it worked for many other readers as well, even if they don’t normally prefer that particular tense.

* GRIMSPACE offers the great breakout character of Vel. I won’t say more to avoid spoilers (although I’ve blogged about him previously), but he alone makes the series worth reading.

GRIMSPACE has all of that to offer and more, and I’d love to hear your thoughts about the book if you’ve read it.

Until next time, check out Ann Aguirre’s blog where she has regular giveaways. She also posts regularly at The Bradford Bunch, Something Wicked, and Writer Unboxed (blogging schedule here).