An Interview With ISLAND OF ICARUS Author Christine Danse 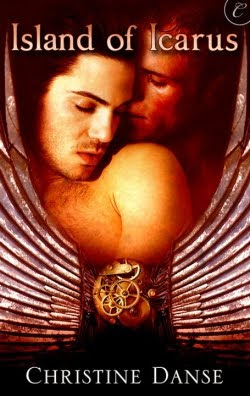 Christine Danse’s ISLAND OF ICARUS is a shiny new steampunk romance novella being released by Carina Press (November 29, 2010). I’m telling you, there’s no end to the variety of steampunk romances we’re seeing so far. I’m also excited that ISLAND OF ICARUS features a male/male relationship, because diversity is the name of the game in science fiction romance. And who can beat the $3.59 price tag? Sweet.

I contacted Christine Danse so we could delve further into the history of the story, as well as learn more about her as an author. If you like free reads, details follow in my interview with her regarding sampling what she has available.

But first, here’s the blurb for ISLAND OF ICARUS:

En route to polite exile in the Galapagos Islands (field work, to quote the dean of my university), I have found myself marooned on a deserted tropical paradise. Deserted, that is, except for my savior, a mysterious American called Marcus. He is an inventor—and the proof of his greatness is the marvelous new clockwork arm he has created to replace the unsightly one that was ruined in my shipboard mishap.

Marcus has a truly brilliant mind and the gentlest hands, which cause me to quiver in an unfamiliar but rather pleasant way. Surely it is only my craving for human companionship that draws me to this man, nothing more? He says a ship will pass this way in a few months, but I am welcome to stay as long as I like. The thought of leaving Marcus becomes more untenable with each passing day, though staying would be fatal to my career...

Now, on with the show:

Christine Danse: Thank you, the pleasure is mine! It may sound cliché, but I’ve been a writer for as long as I’ve been able to put words together. My dad used to immerse me in these incredible interactive stories, and as soon as I learned to write, I started penning my own. In the 7th grade, a well-meaning English teacher encouraged me to pursue publication—and sparked an obsession! I’m glad she did, because what else am I to do with an overactive muse, a scattered attention, and a mass of eclectic interests?

TGE: You recently made your first sale to Carina Press. ISLAND OF ICARUS will be released on November 29, 2010. First, congratulations! Please tell us a little bit about the story.

Island of Icarus is a story about two men falling in love in an alternate 1893 with advanced technology—a steampunk setting in which wonders like mechanical computers, steam-powered androids, and clockwork body parts are all a part of normal life. Well, usually.

When Icarus opens, biology professor Jonathan Orms is trying to piece his life back together. It’s been a hard year for him—first his fiancée left, and then he lost his right arm in a horrible accident. What he is left with is a hulking clockwork prosthetic and a shattered spirit. As if things couldn’t get any worse for Jon, his dean sends him to the Galapagos Islands on “field work” because his dark spirits are scaring everyone. Fortunately for Jon, he doesn’t make it that far. A violent storm off the coast of South American leaves him marooned on a (mostly) deserted tropical island. There, he is saved by the one man who lives here, a handsome surgeon and engineer. The two get along famously, maybe because they are both absolute science geeks.

TGE: What inspired it? 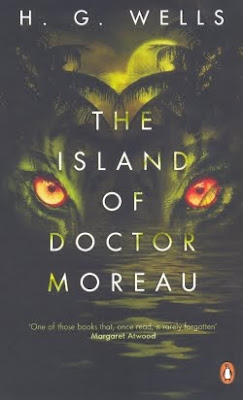 CD: Funny enough, The Island of Dr. Moreau by H.G. Wells. Here’s this story about a man shipwrecked on an island inhabited by a mad scientist… What if the mad scientist was pleasantly eccentric instead of murderously insane? (“And what if he was hot and liked men?” adds my friend Rhianna from across the table, with a grin.)

The romance in Icarus was inspired by Mercedes Lackey’s fantasy novel, Magic’s Pawn, which I read in high school. It’s still one of my all-time favorites. Like Jon from Icarus, the main character in MP, Vanyel, has no idea he’s gay—he just has this difficult time fitting into society and has no clue why. One day, he meets this really sweet, smart man and realizes he’s falling in love. In fact, one pivotal scene in Icarus was heavily inspired by MP. I won’t tell which one, because that would give the story away. :)

TGE: What was the path to publication like for this story?

In July 2009, I visited a small fantasy convention with my friend and writing partner, Dena Celeste. We were relaxing in the hotel room, jotting notes and cruising the Internet, when Dena suddenly announced that Lyrical Press had posted a call for steampunk submissions. I just about danced. I had been turned on to steampunk in 2004 after reading China Mieville’s macabre steampunk fantasy, Perdido Street Station, and had no idea it had become so popular. (What rock had I been under for five years?) I did some research and discovered that steampunk was exploding! Lyrical Press was not the only publisher searching for steampunk titles. Samhain was collecting submissions for a steampunk-themed romance anthology, so I set to work immediately on the story that would become Icarus.

I was disappointed by a form rejection from Samhain, but I shrugged my shoulders, brushed up the manuscript, and sent it out to Carina Press. About a week after submitting it, I woke in the afternoon (I’m a night owl) to a voice message from Angela James, the executive editor of Carina. She had called regarding Icarus, but she didn’t state why—only that she would be sending a follow up e-mail. I was lying down when I listened to that message, and I have never leaped out of bed so fast! I was a mess that day. I checked my email about every five minutes. Of course, Angela called because Icarus was accepted. ^_^

Since then, it’s been a whirlwind of edits, edits, edits. I was in San Francisco for my birthday in August when the final copy was sent out to the copy editor. I was so glad my hotel room had wi-fi!

TGE: Do the characters use any cool steampunk gadgets? Describe a few of them.

The narrator, Jon, has a clockwork arm. His real right forearm was lost in an unfortunate accident that involved sleep deprivation and the operation of heavy machinery. Apparently, difference engines and emotional crises do not mix. When Jon is marooned, Marcus—the story’s other hero—builds him a new model. I love Marucs—he just can’t stop tinkering, can’t stop moving. He is working on a pair of man-sized mechanical wings, but he keeps getting hung up by relatively little—but very important—details.

My favorite gadget in the story is actually a pair of yellow finches that Marcus keeps in his bedroom. As a side project, he has built tiny electric wings for them. They can’t fly, but the birds can spread and flutter them like real wings. I can see them glittering metallically in my mind’s eye.

TGE: In general, what kind of stories can readers expect from you?

I love, love, love creating my own worlds and making them tick, and I am very interested in science fiction and fantasy mish-mashes, so I’ve got a whole slew of hybrid worlds to explore: supernatural cyberpunk, futuristic fantasy, and clockwork fantasy. Although it’s not evident in Icarus, my steampunk world is actually a “strange steampunk” world with alchemy, dragons, fae, occultists, and gargoyles. There’s more of that in my Pushing the Bell story, “That Dratted Affair with the Dream Engine.”

TGE: If you could travel to any steampunk setting, where would you go, and why?

CD: Oh! Man. Good question. I’ve never been to London, so that’s an obvious choice. I’d sure love to visit my heroes on their deserted tropical island (it’s modeled after the gorgeous Cocos Island off of Costa Rica). But really, it’s gotta be San Francisco. That’s my current project/obsession: building an alternate strange-steampunk San Francisco. I love that city and its old Victorian homes. (Of course, they wouldn’t be “old” in the 1800s!) I love the winds that chase you down the street, the evening mist, the waterfront, the steep streets, the history—it’s a perfect place for a mix of advanced Victorian technology and supernatural influences. In my alternate San Francisco, there’s a lot of spiritual, occult, and fae activity. Oh, and a sexy gargoyle. ;) 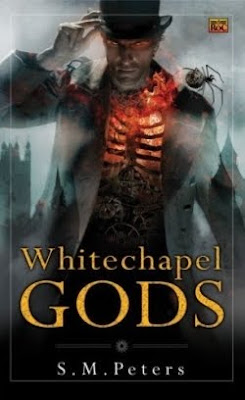 CD: Ah! The Difference Engine by Gibson and Sterling, for sure. Of course, I mentioned that Perdido Street Station started it all for me. That was a very heavy, dark story—I absolutely loved it, but it took me a year to read. I love the steampunk elements in American McGee’s computer game, Alice, and in the massively multiplayer online game, World of Warcraft. Oh, and I loved the novel Whitechapel Gods by S. M. Peters. That is my personal favorite.

TGE: Is there anything else you’d like to share about ISLAND OF ICARUS or any other projects?

Ms. Danse, thanks for your time, and for your art.

For more information about the author and ISLAND OF ICARUS, follow her on both her blog and Twitter (dansedesirable).

Let's hear it for clockwork arms!