STAR WARS arguably has had more impact on modern-day cinema than any other movie in the last 30 some years.

From the lucrative merchandising to the repeat business from die-hard fans who micro-analyze every scene, this modestly budgeted, former studio pariah (before its release) went on to conquer both filmdom and fandom.

In terms of lasting cinematic impact and influence, STAR WARS is now the contemporary version of THE BATTLESHIP POTEMKIM & CITIZEN KANE rolled into one—a movie most Hollywood filmmakers (as in 98%, allowing for the few David Lynches in the system) and certainly ALL of the studios (as in 101%) covet and yearn to emulate.

But at the heart of all the action figures, laser blasts, and other fun skewed to boys and their boy-at-heart dads, there lies a strong current of science fiction romance—and one that’s raked in, oh, just a few billion dollars over the years.

Given this, I decided it’s high time to explore what worked (and what didn’t) in the sweet side of Mr. Lucas’ 6-part epic. First up, let’s explore the smoldering good looks of our number one Corellian pilot and a certain diminutive princess with oh-so-distinctive hair stylings.

1) Han’s Character Development – An SF Hero for the People

When we first meet the loveable, brash Mr. Solo, we’ve already acclimated ourselves to the kind-hearted farm boy and his grandfatherly mentor. Han immediately stands out:

Better yet, most of the aforementioned qualities are evident in the first five minutes of Mr. Solo’s onscreen introduction to the galaxy. (Let’s all agree to pull an ETERNAL SUNSHINE lever and just erase the incredibly wrong-headed Han doesn’t-shoot-first revision from our minds. Forever.)

There aren’t many romantic moments in the original film, but it sets up everything nicely for the sequel. By the time EMPIRE rolls around with its icy climes and icier princess, we know things are going to heat up in the Millennium Falcon very soon.

We all know the lines, but here are just a few as refreshers from THE EMPIRE STRIKES BACK:

Han Solo: Afraid I was gonna leave without giving you a goodbye kiss?
Princess Leia: I'd just as soon kiss a Wookiee.

Han (to Chewie): The Princess. You have to take care of her. You hear me? Huh?
They kiss. And Vader orders Solo lowered into the freezing pit. But before the carbonite hits…
Princess Leia: I love you.
Han Solo: I know.

These are just a sampling of the funny/sexy/heart-tugging bon mots that helped ignite the screen—Hepburn and Tracy in space. Nothing more needs to be added here, as this dialogue says it all.

Forget your foreknowledge of what’s to come and think back to the films in their order of release: 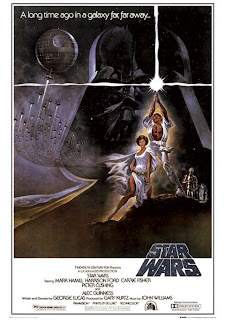 STAR WARS (1977) – Blasting his way out of the Death Star and helping rescue Leia left little time for more than short intros between Han and the princess—but clearly the undertones are there... along with a burgeoning love triangle.

Luke: Encounters a real-life princess. She’s beautiful. She’s sassy. She even gives him an innocent peck on the check, “For luck.” Days earlier, Luke’s monthly high point would be heading into Tosche Station to pick up some power converters. This moment with Leia certainly tops that for excitement in his eyes.

Han: Also encounters a real-life princess, who better be loaded with the cash he can use to pay off a certain angry Hutt. She’s obstinate, headstrong, but…still “has a lot of spirit.” This realization causes him to wonder aloud, “I don't know, whaddya think? You think a princess and a guy like me...?” (A line delivered in a get-your-goat moment to an obviously smitten Skywalker, who quickly snaps, “No!” for more love triangle construction).

Leia: Focused and fearless, Princess Leia’s mind remains on one thing: Protecting peace-loving Alderaan and the rebellion, and delivering the plans hidden within R2-D2. She has no time or thought for much else—although a girlish smile at the end allows her personality to seep through the royal exterior cracks.

So that was the romantic stage set, yet largely unfilled here, for the next in the series… 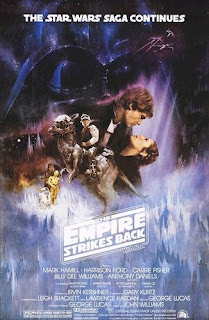 THE EMPIRE STRIKES BACK (1980) – Heeding the advice that some romance would help draw more teen girls, Lucas adds the magical valentine’s elixir to the story for what many consider to be the best of the six films. In it, the latent romance explodes.

Luke: After encountering the claw-filled end of a Wampa, Luke reconsiders his luck after a long, passionate kiss from Leia scores points for him in the advancing love triangle of Han/Leia/Luke.

Han: Tries to shrug this moment off…but can’t quite do it. We can read it in his open-book expression: He knows she’s only trying to fan the flames of jealousy (uh, right?), but he falls for it anyway. Further eruptions of the J-creature appear at Bespin, when the dashing Lando cavalierly attempts to sweep Leia away.

Leia: Han is fanning some seriously feverish flames within the stalwart royal even though she doesn’t want to admit it—least of all to herself. Later, a close encounter on the Falcon forces Leia’s romantic hand, and her tough façade finally comes crumbling down in Han’s arms…just as they are forced to say goodbye. 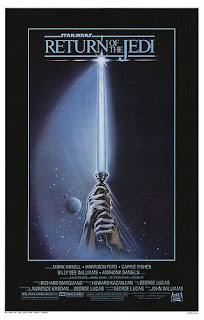 Blinded, coming out of carbon freezing.
Han: Who…who are you?
Leia (removing Boushh mask): Someone who loves you!

The relationship is now open and mature—all evolving naturally.

Trying to top EMPIRE’s secret, JEDI reveals another one itself—one that ties up the romantic triangle presented in the first two films.

I can imagine that infamous writer’s moment, the one where Lucas is sequestered in a room wondering how to fully resolve everything—including the triangle:

“Harrison wants Solo to die. If that happens, Luke and Leia could walk off into the twin sunset. But I can’t have Han die…. Hmm. What would Kurosawa do…?

I know! Leia and Luke are siblings! Han gets Leia! That way, everybody’s happy! Genius!”

Hits desk-mounted C3P0 figure with voice chip: “I find the odds of anyone disagreeing with you approximately 3,720 to one!”

Hurm. This revelation bothers me, only because I see it as the lazy way out. I don’t believe for a second that Lucas planned things this way from the beginning, no matter what he professes. It makes the scenes in the early films...well, “icky” is the most polite term I can muster. 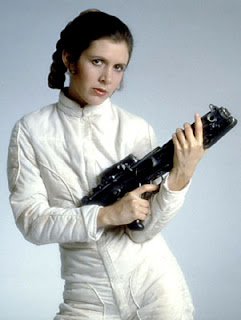 Maybe I’m wrong—as it’s just a theory of mine. But, I don’t think so. And yes, I do remember Yoda’s “No, there is another” line from EMPIRE, but that’s extremely open-ended. At the time, I thought it could refer to Boba Fett being a secret Jedi, an arc that I still feel would be a better resolution for that great character than the throwaway one used in the film.

And exploring all possible narrative directions…? It can be a good thing. Lucas obviously changed his original far-reaching plans, given the dwindling presence of a certain Mr. Binks as well. (Lucas intended Jar Jar to be a major character in all three prequels.) Writing is an organic, creative process. I would have loved to see the romantic triangle resolved another way in JEDI, but…easier paths were taken. Can’t have everything. At least the final fight with Vader gets ye olde viewers’ hearts to pumping.

And, oh yeah…this movie also has Ewoks. Lots and lots of Ewoks.

As you may be able to tell, JEDI ranks a distant third for the original trilogy in my book. Like piping hot NY pizza sprinkled with spots of mynock guano: It certainly has its delicious moments, but its flaws are impossible to ignore, too.

Having said that, JEDI is, however, CITIZEN KANE wrapped in CASABLANCA’S script with 2001: A SPACE ODYSSEY’s vision in light of what was to come.

Next time, we’ll cover the other great romance of the Star Wars Saga: One that manages to do everything wrong where Han and Leia did everything right (well, mostly everything) in the original.

In the meantime, as I said upfront, the first three films have brought in more than a few bucks at the box office. It’s an obvious point—as anyone who’s been conscious for the past 32 years knows—but I bring it up for a reason: Why is SFR still considered such a niche subgenre by the publisher marketing powers that be when its elements run so strongly throughout six of the most popular films of all time?

Await your answers, I do!