Now that we’ve discussed what worked so well with Han and Leia, it’s time to explore the opposite end of the romance spectrum and what went so disastrously wrong with the prequels’ amorous pair. And no, I’m not referring to Threepio and R2 (hawt though they may be).

I remember my first viewing as if it were yesterday.

My husband and I had literally driven the extra mile (or 30) to see EPISODE II: ATTACK OF THE CLONES in a theater equipped with DLP projection—all digital for an all digitally shot production. Such a theater was still slightly rare back in 2002, so you had to be quite assiduous in seeking them out. After finding one and waiting in a line that snaked its way back for a quarter of a mile, we were soon nestled into our plush seats inside our destination.

There were no previews as the theater didn’t have them digitally. An IT guy was standing by in case the Master Control Program invaded the system at any point. (It didn’t.) After a short announcement from the theater manager about DLP, the movie started. Despite the bitter Naboo pill that was EPISODE I: THE PHANTOM MENACE, my excitement level still skyrocketed upon hearing the first majestic strains of John Williams’ score with the title crawl.

This was a new STAR WARS film, and it promised to be much better than the last. Lucas would have learned his lessons from the last one and incorporated changes here: More action; no Jake Lloyd; less Jar Jar; and more movie magic...right?

Cut to 45 minutes later—and I’m checking my watch. Often. This wasn’t going to turn out well, and I knew it—DLP projection or not.


Conversations about Zen and the Art of Hating Sand 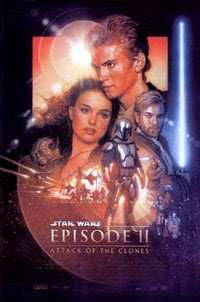 As I’m watching the movie, a woman in front of me is asking a man—her husband, I assume—who everyone is and what’s happening. “Who’s that guy? What did he say? Well, what are they going to do?” The thought crosses my mind that if she would only shut up for a minute she might hear what people said.

Then, I hear a line that makes me think I misheard it.

Annakin: I don't like sand. It's coarse and rough and irritating and it gets everywhere. Not like here. Here everything is soft and smooth.

Wait. Did I just hear the future Darth Vader say he doesn’t like sand? What??? I gave my husband a WTF?! nudge, especially since this came in a movie that was already replete with linguistic howlers and characters named “Count Dooku” and “Elan Sleazebaggano.” Geez.

All the film’s dialogue was so natural (-ly stiff, that is), so memorable (-ly, bad, that is), and…well, okay the Yoda light saber fight at the end was cool. Lesson learned: It’s hard to get emotionally involved with characters when their sweet nothings sound like something written by non-WGA service droids.

Trying (and Crying) Too Hard

One thing about the prequels: Everyone knows where the story is going. This doesn’t necessarily doom a tale; in fact, it can enrich it. Many Greek plays in antiquity used the audience’s foreknowledge of a character’s future fate to great effect.

But it seems to be a limiting factor in the prequels—too much of trying to cram square pegs into preformed rounded holes.

To wit: We know Darth gets frisky at some point and sires children. To keep this family friendly, he’ll need a wife, which means a girlfriend, which means a courtship.

That’s not the problem. But ramming two incompatible characters together is. It’s been suggested that their mechanical scenes and forced dialogue together are all part of Lucas intentionally channeling the motifs of courtly love.

Maybe. But intentional or not, it’s boring onscreen nonetheless.

As we discussed before, Han and Leia’s romance feels organic; it evolved from the story instead of the story being built around the romance. It’s also a textbook case for conflict: they were thrown together and sparks fly, based on mutual need and while battling the Empire—all resulting in higher stakes and more tension.

Compare this progression to the Anakin and Padme romance, which comes across as extremely false and forced. Sure, we know the end of this romance going into it, but Lucas failed to keep us guessing (and caring) along the way. Euripides aside, a great tale can still be crafted when the audience knows the outcome.

DAY OF THE JACKAL dishes a nail-biting tale about an assassination attempt on Charles de Gaulle, which everyone knows doesn’t occur from the onset. But, as this film shows, it’s not the story itself but how the story is executed that can really cause it to sink or swim.

Nonexistent chemistry, clunky dialogue, and courtship scenes in yawn-inducing contexts (frolicking around in the fields of Naboo) is a recipe for disaster (we’re talking Jar Jar Binks proportions here). Padme falls in love with a tortured hero whose angst should have resonated deeply within viewers since we know he’s going to become Darth Vader. But instead, Anakin’s angst translates as artificial and manipulated because of his woefully neglected character arc.

This leads us to… 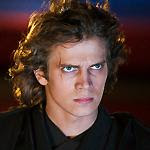 There’s already been much vitriolic venom spit at Christensen’s screen presence (or lack thereof) in the prequels. In his defense, I don’t think it’s entirely his fault. SHATTERED GLASS demonstrates that Christensen can act convincingly under the right conditions. (JUMPER shows…well, maybe he won’t be mulling ghostly edicts as Hamlet on stage anytime soon.)

In the prequels however, little Ani didn’t have many tools for emotional resonance: The soundstages consisted of a greenscreen, a prop or two…and Lucas pulling the strings off-camera. And if the marionette master says do it exactly this way—well, you do it if you prefer your paychecks signed. Combine this noose-tight, no improv restriction with his infamously terse “faster” and “more intense” direction—all under the auspices of slathering the performances with wall to wall special effects in post-production—and you’re left with an Ewok forest full of wooden performances.

What chance does this give a tug-at-your-heart-strings silver screen romance of working? About the same as a glacier (and a tap dancing one at that) naturally forming on Tatooine….

The Romance Happened as a Convenience of the Plot

I can suspend my disbelief about Luke Skywalker being an expert X-Wing pilot despite having never flown one before. (Hey, he used to bullseye womp rats in his T-16 back home!) I can even overlook the way a light saber cuts through metal and flesh sometimes (SW & TESB), but merely functions as a colorful baseball bat to smack others on every other Wednesday (the fight on Jabba’s barge in ROTJ).

But, I cannot ignore flaws in characters’ motivations, especially when said motivations are essential to the overall plot.

One sure sign of cartoon characterization anywhere is the ol’ “I’m the bad guy so I act bad because, uh, that’s what bad guys do” line of reasoning (see Snidely Whiplash). This also applies to ye olde “I don’t know you and we have nothing in common, but, uh, I LOVE you (because it’s in the script)” trope of a thousand years. 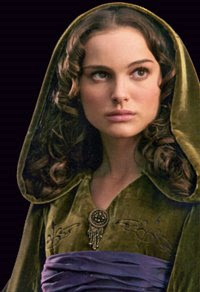 In TPM, Queen Amidala meets Anakin when he is a child. The queen is supposedly 14 years old, although she looks like an adult. Later, in EPISODE II, she looks basically the same. Suddenly, Anakin appears to be an entirely different person, all grown up. (Warning: Suspension of disbelief rising to overload…!)

But, I can even overlook that. Lucas couldn’t apply Miracle Grow to Jake Lloyd. The reason our couple falls in love though...that’s the real head-scratcher.

Is it because…uh…they share a 70s Kodak moment frolicking in a field? Her skin is softer than sand? Padme was nice to him as a kid? (This sorta works for his motivation, on a superficial level, but not for hers.)

No matter how you slice it and dice it, this happens mainly because the story requires them to fall in love. So, faster than you can say “Contrivance City,” poof! Puppy dog eyes appear.

More artificiality rears its Sarlacc tendrils in REVENGE OF THE SITH when Padme needs to leave us. She just flicks off the switch and exits stage left. (The weak "broken heart" excuse we're given isn't worth a plugged Mos Eisley nickel.)

There’s a reason why this pair was dubbed least convincing couple.


There’s much more wrong with these films than what I’ve discussed here. Most upsetting to me is the fact that Lucas had carte blanche to do whatever he liked—with no studio interference and very healthy budgets—and these underwhelming films are the end results? Gadzooks. Perhaps the prequels should never have been filmed at all, thus preserving our own individual fantasies about this once-fascinating, yet doomed relationship.

One also wonders if Anakin and Padme's relationship should even be characterized as a romance. It certainly doesn’t end like a traditional one. But I’ll leave the floor open to you now. Did Anakin and Padme’s romance fail because the whole three prequels were essentially backstories? Were they an artistic mistake, or a case of commercialism trumping art?