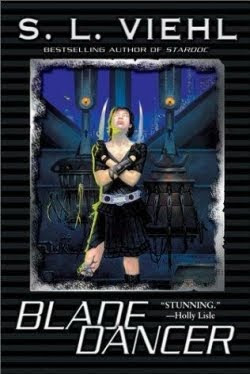 Ever in the pursuit of an intriguing science fiction romance, I’m always game for exploring the subgenres unique angles. Sometimes these angles are already being incorporated into stories, but occasionally they aren’t or not on a regular basis. Heroines with handicaps/disabilities is one such angle. Heroes with disabilities, whether physical or mental, seem to be much more common. But what about stories featuring heroines dealing with the same challenges? More on that later.

Given that we don’t yet know how physical and mental disabilities will be addressed in the future, both in terms of medical treatment/management and cultural attitudes toward them, I wonder about the different ways such a theme could be incorporated into SFR. I suppose there could be stories wherein our DNA is fine tuned to such an extent that biological impairments could be eliminated. Or perhaps medicine becomes so advanced that doctors can cure or regenerate any part of the human body in need of such treatment.

But would eliminating impairments make for an interesting science fiction romance? Or any speculative tale, for that matter. Never mind the fact that what science can do, nature can undo. We are bred to adapt. For example, even if science eliminated congenital blindness, might it resurface when its existence became crucial to the survival of our species?

During a recent exchange I had with TGE passenger Anne B., we were discussing how we’d both like to read a romance in which the heroine has a handicap. Our preference is for stories involving SF and/or fantasy, but we both agreed that any well-crafted story regardless of subgenre would be worth pursuing. But! As Anne astutely pointed out, the story would be more compelling if there weren’t any cop-outs. By cop outs, she clarified:

1) The heroine’s handicap is resolved/healed in some way prior to her HEA.

2) The handicap becomes a non-issue based on milieu (e.g., deafness in an environment where every non-deaf human has to wear earplugs to keep the local inhabitants from piercing human ear drums with their loud calls).

3) The couple is united by a magical, psychic, biological, etc. bond they have no control over. This bond tends to ensure the hero can’t have a satisfying relationship with the vast majority of otherwise eligible women.

4) The handicap turns out to be a side-effect of great magical or psychic power that enables the heroine to save the world or the country.

Turns out, heroines who win the hero despite their disabilities are on the rare side. Therefore, our search required assistance from an ally of epic proportions: Enter The League of Extraordinary Smart Bitches and Their Legions of Followers.

In GS: vs. STA: Handicapped Heroines, SB Sarah posed the challenge—and her army of romance fans answered the call. The thread swelled to many, many comments, and is a wealth of information on this topic. I took the liberty of culling most of the titles into a list, which I present for you below. I divided them into the broadest of broad categories, and have done my utmost to make sure each book is in the proper category. (However, I stopped short of an anal-retentive effort to place them in alphabetical order.)

So, if you’re interested in reading about romance heroines with disabilities--and why wouldn't you be--then today is your lucky day!

For more titles, check out All About Romance’s listing for heroes and heroine’s with disabilities here and here.