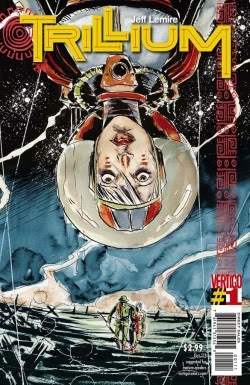 
A science-fiction romance about two people from completely different time periods, Trillium is all about perspective, and Lemire has used the time-bending plot to experiment with methods of depicting separate points of view with the opportunities afforded by comic books. The flip-book Trillium #1 was just the beginning of Lemire’s structural experimentation, although not all the layout changes have been as drastic as that first issue. There’s no flipping required for the series’ second chapter, which changes the shape of panels to show how William and Nika view the world differently: William’s pages stick to rectangular panels while Nika’s pages incorporate circles to give the futuristic character less traditional layouts.

The last sentence indicates this series offers readers an unpredictable story path. I will investigate further because if the ending is HEA or HFN, that'd be a case of sci-fi romance expanding in the comic book medium in a very unique way!

Vertigo is releasing this series. Here's the story blurb: 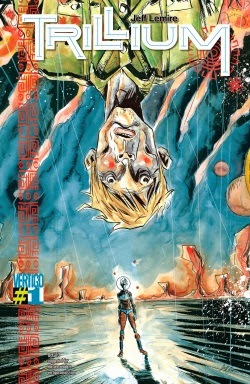 It’s the year 3797, and botanist Nika Temsmith is researching a strange species on a remote science station near the outermost rim of colonized space. It’s the year 1921, and renowned English explorer William Pike leads an expedition into the dense jungles of Peru in search of the fabled “Lost Temple of the Incas,” an elusive sanctuary said to have strange healing properties. Two disparate souls separated by thousands of years and hundreds of millions of miles. Yet they will fall in love and, as a result, bring about the end of the universe. Even though reality is unraveling all around them, nothing can pull them apart. This isn’t just a love story; It’s the LAST love story ever told.

This amazing miniseries kicks off with 28-pages of story in a flip-book with two covers and two separate but connected stories!

Looks fantastic (and fantastical!). I also found an interview with Jeff Lemire in which he discusses TRILLIUM.