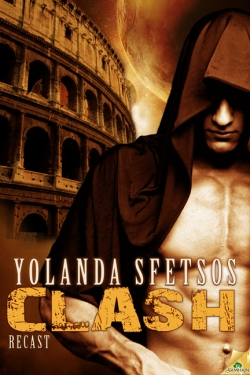 Yolanda Sfetsos (ALEX WALES: PROMISE) is the author of CLASH, a forthcoming science fiction romance from Samhain Publishing. The release date is January 24, 2012. You can read an excerpt here.
And now for the blurb:

Unable to resist temptation, they’re consumed by passion…but once the fuses are set, their deepest personal secrets could blow any chance of forever all to hell.
Product Warnings
This book contains a very lonely shapeshifter in need of some loving, a kick-ass singer leading a double life, a serious case of mutual lust, an arena filled with enslaved warriors, and so many secrets it can only end in total madness.

You can read the author's announcement post for CLASH here. To learn more about Yolanda Sfetsos and her work, check out my interview with her.
Joyfully yours,
Heather
Posted by Heather Massey at 6:00 PM
Newer Post Older Post Home