Sex In Science Fiction Is Only Half The Story 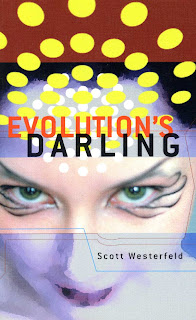 That article intrigued me since I have a forthcoming LoveLetter column that will discuss the presence of romance in science fiction. But naturellement, there’s sex, too, with or without a romance.

With that in mind, let's examine the differences between sex in SF and romance in SF.

While some SF stories contain romantic elements, sex in science fiction, as the io9 article addressed, tends to underscore gender issues of a cultural/political/psychological nature and can be very experimental while doing so.

Here are a few of those issues as referenced and discussed in the article:

A romance, on the other hand, tends to focus on the emotional journey of the hero and heroine. The prose is devoted to the emotional risk taking, relationship arc, interpersonal conflict, relationship dynamics, and Happily Ever After (whatever that entails). Sex scenes are often present but are certainly not a requirement. If they are part of the narrative, their expected goal is to further develop the relationship and/or move the story forward. (Some sex scenes fall short of that goal, but that is a post for another time!)

Yet romance can also explore topics such as gender issues as well as challenge the heteronormative status quo. For that reason and others, science fiction romance has so much to offer as well as a galaxy of potential. SFR involving a traditional romance story structure/elements certainly has its appeal, but other books are and could be more experimental in nature. This subgenre can focus on the romance or veer into the politics of such a romance in the context of the story’s setting. What a package deal—no need to read two or three different books to get your fix!

I find such a broad approach, and that kind of inclusiveness, very exciting.

What also excites me about SFR’s prospects (and many authors have done this already), is that these stories and issues are generally approached from a female-centric perspective. No wonder romance can be such a threat to some SF readers, who, as either critical, uninitiated, or both often relegate it to a genre ghetto.

While sex in SF serves a noble purpose (most of the time), romance in science fiction also challenges a panoply of stereotypes, especially those concerning women’s roles and sexuality. And it challenges SF fans to acknowledge that romantic love, whatever its configuration, is a valid element to include or focus on in a science fictional setting.

Sometimes, it isn’t all about the sex.