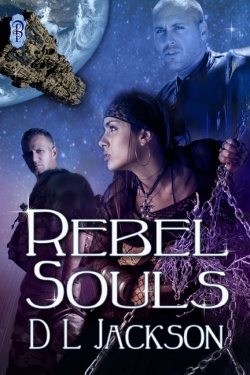 Rebel characters are practically the bread and butter of science fiction stories, so it’s no wonder that they’ve migrated to sci-fi romance. One of the more recent entries is D.L. Jackson’s REBEL SOULS (Decadent Publishing). So when you’re in the mood for an SFR featuring rebels, here’s a handy list of tags to see if this one is right for you:

*Type of plot: The plot itself is straightforward—a group of rebels is building a weapon and has to smuggle the needed materials. In order to do so, they have to evade enforcers working for the Evil Government. (It’s really not as campy as all that; I just wanted to write “Evil Government” because when do you ever see that? Not often enough, LOL!)

* Type of romance: A forbidden love develops between rebel smuggler Ava Frost and Fleet Commander Seth Reynolds. Despite the two guys on the cover, this is not a ménage romance.

* Political unrest quotient: High, and it’s channeled through the three main characters rather than an ensemble cast. The story focuses on political machinations taking place at the interpersonal level rather than the systemic one.


* Regarding the worldbuilding, it’s of the “just the facts ma’am” variety, which will totally work for some readers while others might wish for more. I didn’t get a strong sense of the “oppressive government” promised by the blurb; however it was clearly hovering in the background. Hmm, but since the hero is a part of this government and served as a source of conflict for the heroine, I suppose you could say he was representin’!

* Action-adventure level: medium. Characters meet, talk, follow each other around, hide from each other, lust after each other, flirt, engage in face-offs, and do the introspection thing. There’s just enough action to spice things up.

* The heroine frequently has the upper hand in her relationship with the hero and she’s not afraid to use it. Unfortunately for her, she’s a political pawn, so much of the conflict stems from her struggle for autonomy.

*The hero was at the mercy of the heroine so much in the beginning that I’m still trying to figure out if his type of character (military commander) was being subverted. It’s either that or he’s a male at the mercy of his gonads. At times he was so in thrall to the heroine that I wondered how he ever made it to fleet commander.

* The final standoff was nicely done because of the tension and stakes.

* The ending/Happily Ever After has a distinct action-adventure/science fiction romance feel, which is nice. It’s also the first sci-fi romance I’ve read where a bromance starts to blossom at the end, just for a little bit. Yeah, you read that right—an SFR that ends with the start of a beautiful bromance. LOL!

Now, you tell me: who are your favorite science fiction romance rebels? And if you could actually be a rebel, what type of job would you want to do?

*You have to sing the title of this post to the tune of that Dr. Pepper jingle for it to make any kind of sense. :P
Posted by Heather Massey at 12:11 AM
Newer Post Older Post Home