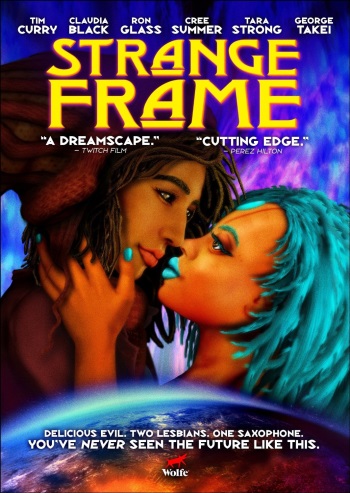 If you're new to the world of STRANGE FRAME, here's the summary and trailer:

Set at the end of the 28th century, the human race has long since abandoned a desolate earth. In order to survive, humanity has been using genetic engineering to adapt to otherworld environments, to the point where changing one’s skin color or gender has become commonplace. On the moon Ganymede, saxophonist Parker (Claudia Black) and guitarist Naia (Tara Strong) develop a close relationship. The two embark on their new relationship and form a new band — but they also must fight for their freedom from the evil Mig (Tim Curry).

After seeing the film, I came to the conclusion that STRANGE FRAME would appeal to many SF/F and romance fans. Here are my top five reasons why:

STRANGE FRAME has an incredibly diverse cast of characters. The film assumes from the start that our future world(s) will be racially diverse. STRANGE FRAME accomplishes the very type of diversity that many readers have observed is sorely missing from the science fiction and  romance genres.

In fact, when the credits rolled, I did a double take upon realizing there weren't any white people in it—at least, that I recalled (I suppose one briefly seen background character could be considered white). The default for STRANGE FRAME is people of color! That's awesome.

Another layer of diversity is the presence of genetically engineered characters and characters with disabilities (one is a double leg amputee). The various types of diversity in STRANGE FRAME felt really refreshing to me.

STRANGE FRAME features a (non-erotic) lesbian romance. The best part? Parker and Naia meet in a world where people’s sexual orientations are normalized. The story celebrates their romance like any other and thus lends it cross-over appeal. In terms of heat level, I'd characterize the lovemaking scenes as sensual.

Lesbian romance is an underserved market across all genres, so it’s fantastic that STRANGE FRAME helped fill this need. This aspect is especially important considering that G.B. Hajim could have chosen the more commercial and “safe” route. 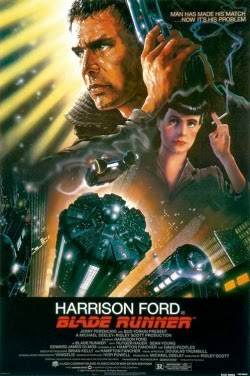 With elements like a far future space opera setting, a space elevator, genetic engineering, spaceships with A.I. brains, homages to BLADE RUNNER, and a generous helping of techno-speak, it's clear that STRANGE FRAME was created by people with a background in and clear love for science fiction.

The film also fully embraces romance and the importance of relationships and community. The theme of the impact of science on romantic love is evident from the very first scene. And during her search for Naia, Parker makes strategic alliances in order to achieve her goal (as opposed to the typical lone action hero scenario).

STRANGE FRAME provides both the "What if…?" sense of wonder as well as an exploration of how technology impacts our need to bond and belong.

Parker and Naia are young and occasionally reckless, but their personalities are marked by a number of traits that make them progressive characters, including

Naia does become a damsel-in-distress, but not, thankfully, as a result of sexual jeopardy. Each heroine takes a turn rescuing the other. While I wouldn't have minded seeing that exchange happen more often, IMHO the film contributes to the number of sci-fi romances involving a jointly shared heroic journey.

STRANGE FRAME is an immersive cinematic experience given the vast number of trippy, animated visuals. A visually-driven plot might be one way to describe the narrative. I had a bit of concern about the learning curve I faced upon engaging with its cut-out animation style, but the visuals fast became one of the elements I enjoyed the most. The animation style has a certain rawness I found intriguing.

I watched STRANGE FRAME from more of an intellectual space than an emotional one. The main reason is that the romance is highly condensed in the beginning and occurs at an accelerated pace. The lovers spend most of the film apart, so there’s no significant interpersonal conflict. Instead, the villain provides the conflict, couple-against-the world style.

Because Parker and Naia spend so much time apart, those who prefer their romances front-and-center might consider this story to fall more on the romantic SF side. That would be an accurate way of framing this story.

That said, STRANGE FRAME integrates the SF and romance elements tightly enough that if either one were removed, the story would fall apart.

The film packs in a variety of elements and many of them had potential for more development. One of the first thoughts I had upon finishing it was that this story might have been better served as a short series, like the kind currently offered through streaming services or cable television. Lo and behold, when I researched the film's Wikipedia page, I discovered that:


They began with creating a backstory and television series done in GB's unique cutout animation style, and began marketing the film. In 2001, MTV made an offer to finance the film, which included MTV owning all copyrights to the project including ancillary rights. In 2002 Doty and Hajim sketched out the arc for a tetralogy and wrote the screenplay Strange Frame: Love & Sax that was planned as the first installment in what they anticipated would become a series.

Learning that background information made me think STRANGE FRAME was a bit ahead of its time. A story with a setting as rich, varied, and far-reaching in scope as the one for STRANGE FRAME deserved an expanded story structure. I'm bummed the tetralogy never happened, but perhaps there's hope for the future projects of G.B. Hajim and filmmakers like him.

Your mileage may vary, of course, but STRANGE FRAME is worth watching if for no other reason than to study what it accomplishes in terms of diversity and its no-holds-barred approach to the blending of SF and romance. I’d be thrilled if more sci-fi romance authors approached their stories in similar ways.