Kelley Harvey's BREATHE is a new adult science fiction romance and I'd like to tag it for you! 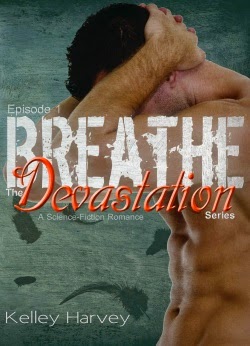 While my tastes veer mostly toward older adult characters, I'll probably read an NA SFR every so often for comparison's sake. Mainly I’m curious to see what authors will do with science fictional elements in NA stories (i.e., which elements/settings will they choose and how said elements will affect the newly adult characters).

Before I begin, here's the blurb:

Here's how I'd describe the SF-romance integration in BREATHE: The science fictional elements are fantastical in nature, but play a very low-key role in this first installment. They're development is also of a slow-burn nature. Yet they're clearly responsible for driving the plot because without them the story would fall apart. If you're an SFR reader who prefers the romance development front and center, then BREATHE delivers.

Below are a few non-spoiler tags and personal impressions to help you decide if BREATHE is up your alley!

* Given the serially published nature of this series, I feel it's important to mention first that BREATHE ends in a major and potentially upsetting cliffhanger. It's more intense than other ones I've encountered. For some readers, the saving grace will be that the author includes a reassuring note as well as a brief excerpt of the next book so they can find out what happens immediately after (yes, I read the excerpt!). Book two, BREAK, releases on January 29, 2015.

* BREATHE falls in the "alien hero who fell to Earth" (but with a twist) and superhuman categories.

* If you enjoy paranormal romances featuring angels, BREATHE might interest you as well.

* The setting is contemporary, specifically in the Southern area of the U.S. (Texas). Not surprisingly given the setting, the heroine and hero are familiar with guns and knives and use them to arm themselves at one point. There's no graphic violence involving them, though.

* Gabe is a highly protective type of hero

* Heroine Lexa has a secret

* It's a New Adult romance since the hero and heroine are college-age. They're also dealing with developmental milestones and major family changes

* BREATHE is mostly focused on the romance; the external plot is a subplot at this point. One plot thread involving one of the heroine's family members in particular doesn't get as much attention as I thought it would given its serious nature. A few intense events occur and I couldn't decide if the developing romance was being treated as a needed distraction for the hero and heroine or if they were more oblivious than one would expect in such a situation. Your mileage may vary.

* Heat level: sensual. BREATHE focuses on the emotional aspects of the romance and the physical aspects involve mostly mental lusting. This may be a refreshing aspect if you prefer an NA with a tamer heat level. The mental lusting factor, though, is in plentiful supply. :)

Related post (via Heroes and Heartbreakers): Can Sci-Fi Romance Give Readers a Fresh Twist on New Adult Stories?