Naturally, that meant we had to have one here. Let’s jump right in, shall we?

Not only do publishers and booksellers grapple with where to shelve science fiction romance, but there’s also a question of which cover styles would most effectively market the genre. The issue is twofold: Branding the genre itself, and branding individual authors.

For the publishers of SFR, there’s a learning curve happening right now. A number of SFR scribes define themselves as such on their Web sites and in other promotional venues. The plots are changing in both tone and focus. Word count expands as the stories become increasingly epic, and the worldbuilding/external plot plays just as significant a role as the romance.

As a result, there’s a push and pull between sticking to tried and true romance cover strategies, and venturing into more SF cover territory. Or vice versa.

For example, here are two of Linnea Sinclair’s original covers:

The publisher redesigned the covers recently:

This change has little to do with art, and everything to do with branding an author and attracting readers from the larger romance market. Understood. But when so many adventurous romance readers with impeccable taste (Oh, phooey, who says I’m biased?!) “cross the aisle” anyway, how effective a change is it? How needful?

Time and sales will answer that, of course, and I’m certainly a big advocate for expanding the SFR market. It makes me wonder, though—assuming the spine had the word “romance” on it, would there have been a big outcry from readers had booksellers shelved her books with the original covers in the romance section? Wouldn’t it have been a lot quicker and more inexpensive just to add “Romance” to “Science Fiction” than a complete cover overhaul?

But then here are the covers from her newest and pending releases, respectively:

That’s quite a bit of variation for just one author. Not only does it reflect changes in time, reader tastes, and marketing strategies, but also the challenge facing publishers who strive to position books to appeal to the widest audience possible (which, ironically, may not be the best course of action when it comes to SFR).

Jan Zimlich’s SFR books offer up the classic clinch cover. The look of Susan Kearney’s books has been pretty consistent, while Dorchester’s Shomi line has its own twist happening.

Let’s examine the cover for Ann Aguirre’s upcoming WANDERLUST, and then BARRAYAR by Lois McMaster Bujold:

Very striking. No man, no clinch, very female centric. There’s also about a 17 year difference between the two books, although one could argue not much has changed.

With such variation of stories, budgets, and skills/tastes of cover artists, how can publishers uniquely market SFR, appeal to diehard fans, and attract new readers?

Having traveled far and wide across ye olde Milky Way, we of The Galaxy Express have answers. So, publishers, if you’re wondering how to dazzle us into emptying our wallets, here are a few suggestions about SFR covers—for free!

* Whether you’re a print or electronic publisher, invest some dang money. I’m not suggesting this doesn’t happen across the board. But cheap, poorly conceived digital effects are just that—cheesy. The hardworking authors deserve smashing great covers.

* Co-op the comic book industry strategy of occasionally putting out two different covers (and as you’ll note in the Enduring Romance article linked above, Jacqueline Lichtenberg is also a proponent of a similar idea). Transform the books into collectors’ items. But the images have to be stellar. Again, it’s an investment. Don’t hire the cousin who “took a Photoshop class one time.”

* Use stepbacks! The outer cover can depict the SF nature of the story, and the inner scene can feature the hero and heroine in all of their romantic glory. Or do the reverse. Either way, it’d be totally righteous. What a bang for the buck!

* Keep the hero clothed. I understand that man titty sells a book better than any other type of cover, but we’re not talking about the vast majority of romance books here. There’s nothing sexier than a man in uniform whether he’s a starship captain, space pirate, or brainiac scientist. Man titty makes me feel manipulated by marketing shticks. On the other hand, a uniformed hero will draw me into the story from that very first glimpse.

* Go Hollywood retro—stuff like that never gets old to genre fans. It’s hip, and readers will instantly “get” the reference.

* Go dark. Unless the story has a severe case of comedy, SFR covers and title fonts should reflect the serious themes these tales explore such as war, death, hostile aliens, powerful inventions, and the unknown.

* If it fits the story, go vintage. What could be more striking than a cover paying homage to the SF/SFR greats of the thirties, forties, and fifties? Pulp is perfect! 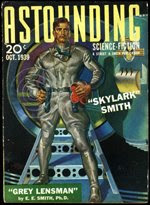 * Embrace the fact that SFR is a blend of genres. Show off that mix of romance, action, and adventure. Make the cover a package deal just like the story.

All I’m saying to industry insiders is this: Know your niche market and exploit it. If there are any authors, editors, marketing folks or booksellers that would like to weigh in on this topic, please do.

I’m sure all of my discerning passengers have thoughts about this issue as well as excellent ideas about SFR covers that readers would like to see. Don’t hold back—describe your dream covers!