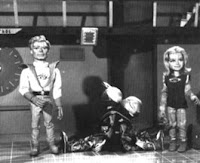 As though someone had peeled away the veil of innocence, the experience opened a gateway to a whole other dimension. My eyes went wide, my body rigid, astonished that anything like it was even remotely possible. Fireworks flared, dazzling the senses and slaking a thirst I hadn’t known existed until that moment.

Let’s be sure we’re on the same page here. You know what I’m talking about, right? Hmm…let’s be certain. I’m referring to my first exposure to the superlative Supermarionation marionette extravaganza, otherwise known as The Worlds of Gerry & Sylvia Anderson!

These and other shows were created by the dynamo team of Gerry & Sylvia Anderson (fortunately, before the two parted ways). The operation, called Century 21 Productions (a.k.a. AP Films), birthed a series of children’s television shows unlike anything before or since.

From the secret base of Tracy Island, to the shores of Marineville, to the airborne heights of Cloudbase, and with organizations sporting names like International Rescue, Spectrum, and World Aquanaut Security Patrol, these shows combined ingredients guaranteed to make a child’s heart race and her imagination soar.

Nowadays, such vintage 60’s fare offers a decidedly quaint form of entertainment with a side of nostalgia. They’re best served if you happen to be reliving he experience, but even if it’s your very first time, a few episodes here and there are good for a few chuckles. (“Oh, check out the puppet chomping on that cigar!”) And I wasn’t kidding about the fireworks—the first scene I watched involved a fireworks display!

For both the hardcore fan and uninitiated noob, I’m presenting the first installment in a series of periodic posts about my favorite Supermarionation productions. You see, this trip into retro SF children’s shows will help explain a thing or three about my rabid attachment to science fiction romance.

Cue the trumpets as The Galaxy Express inverts the cosmic hourglass for a journey back to the (not so distant) future….

FIREBALL XL5, set in the far flung year of 2063, focused on the exploits of one of science fiction’s grooviest spacemen, Colonel Steve Zodiac of the World Space Patrol. Each episode unveiled his adventures on exotic worlds and encounters with naught but the hippest of aliens, all while he and his loyal crew secured the safety of Sector 25 (perhaps taking the counsel of “keep it simple, stupid” a little too far). Naturally, intergalactic villains abounded, such as “Plant Man from Space” and “Space Monster.” These devious, ingeniously christened characters stole every scene in which they appeared.

Filmed with the increasingly specialized puppetry and model techniques described as “Supermarionation,” FIREBALL XL5 was the last Anderson show televised in B&W and ran from 1962-63.

Colonel Steve “I’m too sexy” Zodiac (pictured above): The blond haired, blue eyed, chisel-featured pilot is also the intrepid mission commander. He never met an order he didn’t like to give.

Professor Matthew ‘Matt’ Mattic: This eccentric (is there any other kind?) scientist is the brainiac behind Fireball XL5’s design. And as if he didn’t have enough to do, the Mattster slaves away as both navigator and ship’s engineer.

Doctor Venus: Venus is the ship’s, uh, doctor (though her exact specialization is a little vague, unless coffee making counts) as well as Steve Zodiac’s main squeeze. This blonde bombshell gave Brigitte Bardot a run for her money, and during various missions caters to Zodiac’s every need like it’s going out of style.

Robert the Robot: Loyal co-pilot, created by none other than the famous Professor Mattic. Trivia tidbit: Robert was voiced by Gerry Anderson.

At Mania.com, Brian Thomas presents FIREBALL XL5: Space Opera’s Missing Link. He breaks down everything that’s wrong with the show:

Among the creaky ideas featured in the show is the fact that only “oxygen pills” are required to protect people from the vacuum of space as long as they've had a pill, Zodiac and crew can swim around outside the XL5 and talk to each other without radios. Space travel takes place in jet fueled rocketships. Officers are armed with sparking “coma guns.” Most aliens speak English, sometimes with “Oriental” accents. One especially obnoxious episode has Matic inventing a time machine, which sends the cast back to the Old West in alternate identities.

Venus, though credited as a highly skilled “space doctor,” still acts like a 19th century female in many situations, making coffee and cooking for the men. In some episode’s[sic] she’s seen cleaning Zodiac’s apartment while he relaxes, and when captured by villains, her first reaction is always, “Oh, if only Steve were here!”

…as well as what’s hot about it:

It’s clear that Zodiac and Venus are spending the night together [emphasis mine] in some episodes, either at her posh beach house or in his apartment in the revolving Space City tower, but no romantic relationship is evident between the two. Steve Zodiac remains essentially sexless at all times, only excited by adventure and rocketry. Though Venus obviously has a crush on her commander, and rebuffs the attentions of other men, she often sighs and resigns herself to her role as one of the boys.

(Thomas’ article also goes on to describe how this show influenced STAR TREK and its descendants.)

Pulpy plots, retro rockets, an offstage romance, and politically incorrect characters/situations—FIREBALL XL5 has it all.

But there’s more! The show’s closing theme, the oh-so-romantic Fireball, was composed by Supermarionation regular Barry Gray. Australian musician Don Spencer sung the lyrics, and the song became a minor hit at the time in Britain.