Will Science Fiction Romance Ever Get Its Own BUFFY?

Paranormal romance (the non-SFR, non-fantasy romance kind) is one lucky duck, let me tell you. 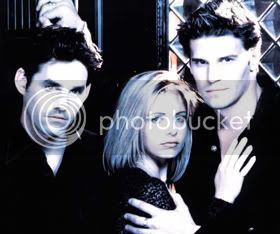 The genre rose to prominence on the smokin’ heels of Joss Whedon’s smash television series BUFFY THE VAMPIRE SLAYER (1997-2003). In terms of visual mediums, BUFFY set the stage for paranormal romance in that it reinforced the dark appeal of vampire characters, featured a heroine with depth and kick-ass righteousness, and created an engaging mythology with a splash of humor. BUFFY’S unique influence, as far as I know, is unprecedented within the history of romance.

I can’t remember how many times I’ve read a paranormal romance described as similar to BUFFY THE VAMPIRE SLAYER. That’s not a complaint, merely an observation. However, I don’t believe I’ve ever read a science fiction romance compared to THE X-FILES or BATTLESTAR GALACTICA. (And that *is* a complaint--wahh!)

Despite the incredible success of the current STAR TREK film, I don’t think it’s the vehicle that will help boost science fiction romance to paranormal romance-like proportions. STAR TREK will undoubtedly pique continued interest in the franchise, and may pave the way for a round of SF films, but I have doubts the benefits would extend to science fiction romance as much as BUFFY did to paranormal.

Science fiction romance the literary genre could benefit from a popular story in a visual medium with a female-centric premise. However, I don’t think either STAR TREK or even a major motion picture is the answer. 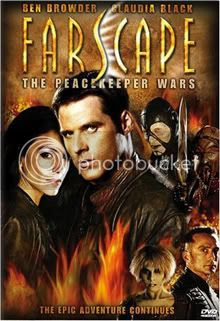 To be realistic, we might not know the “it” SFR film or TV show until years after the fact. FARSCAPE could have been “it” but I’m guessing the Jim Henson generated characters were a detractor for many potential SFR fans. For all we know, BATTLESTAR GALACTICA is “it.” But if it’s as influential as BUFFY was for paranormal romance, we have yet to see results in terms of book pitches or as part of a marketing package.

Or there may not be an “it” film or TV show at all.

Grim reality aside, I’m all for speculating about what type of story elements and factors would be involved to create a science fiction romance in a visual, non-print medium that we could later claim as our Vampire Slayer.

I’m not alone in this speculation. On a related note, Jacqueline Lichtenberg has been working on “...the puzzle of how to get an SF Romance onto TV or into the movies to do for the genre what we have done (according to NEWSWEEK, anyway) for SF.”(Urban Fantasy Job Hunting). In The Puzzle of Romance, she notes that “Science Fiction became much more publicly acceptable, more accessible, and attracted feature film money and even won Emmy and Oscars where SF never did before, after Star Trek hit the TV screen.”

Okay, so paranormal romance has BUFFY, and SF owns STAR TREK and probably STAR WARS as well. But the new STAR TREK has definitely planted a seed:

In Star Trek’s Reboot Seeks Out New Life, New Civilizations, New Audiences, Lisa Paitz Spindler notes that “As a fan of all things Science Fiction, I hope the new Star Trek movie not only introduces the genre — both in TV/movie and book formats — to a new audience, but I also hope the new audience realizes that Science Fiction is as much about the characters as it is about science…This kind of character-driven engine of the story should strike a cord with Romance readers since a defining feature of Romance is that relationships influence character.”

All of the above is spot on, but unless the director is James Cameron (who has a predilection for strong female characters), the director and writer of studio feature films often have limited control regarding creative aspects. Therefore, an SFR project in a visual medium has numerous obstacles to overcome.

Never fear—I propose a few factors which might mitigate such obstacles:

The framework of a miniseries or television show has the most potential for success, for several reasons. In general, they are less expensive than films. Because SFR stories are character-driven, a television show or miniseries can take more time to develop both the characters and the romance. And there’s always cable. Because many cable channels cater to audiences enamored of niche shows, they can take more creative chances than network TV.

Much as we’d love to see original material, Hollywood is averse to risk-taking. Therefore, I propose that this SFR project be adapted from an existing source. Comic books are hot now, and there is plenty of science fiction romance present if you know where to look. 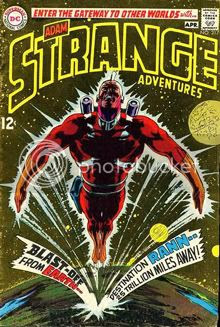 ADAM STRANGE is one such property ripe for the plucking. Wikipedia describes the character as such: “Strange is an archeologist suddenly teleported from Peru, Earth to fictional planet Rann through the ‘Zeta Beam.’ Called on to protect the planet from extraterrestrial threats using high-tech weaponry, Strange grew to care for the planet and its inhabitants, especially the blue-haired Alanna. Independently wealthy, he traveled Earth, intercepting the regular patterns of the Zeta Beam to defend Rann and be with Alanna.”

Each story finds Adam Strange desperately searching for where the Zeta Beam will strike next on Earth. If he misses it, he misses his window to travel to Rann, where he is reunited with his love, Alanna. The characters see plenty of action: He always has to confront some new alien or planetary threat. They also bring on the romance: Alanna and Strange are always separated—aaaah!—just as they vanquish the threat and the Zeta Beam wears off, transporting him back to Earth and tearing them apart until next time.

Updated and nudged the right way, this could have the visual science fiction action combo with strong romantic elements that would appeal to plenty.

But if original material somehow manages to slip past the Hollywood gatekeepers, another way to make an SFR project appeal to a wider audience would involve familiar, accessible elements. And what could be more appealing than steampunk? A steampunk miniseries or show has the potential to interest viewers who would be open to alternate history SF than the futuristic kind.

It’s All in the Pitch

Pitch and market the project as anything but science fiction romance. But it would be imperative to include buzz words like “action-adventure,” “romance,” and “edgy.”

Those are just a few ideas. I’m sure there are other factors to consider. What type of science fiction romance show do you think could capture a certain chemistry or “it” factor similar to the one that J.J. Abrams and his team harnessed for STAR TREK?