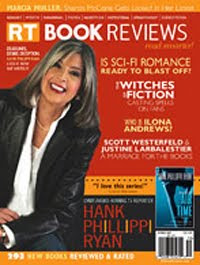 Now that I have a copy in my greedy little hands, I simply must blog about it, darlings. The title of the piece is “SCI-FI Romance: Star-crossed Lovers Are Waiting For Readers.” I love the message of that title. For me, it implies that SFR heroes and heroines are more than just words on a page. They are people with a need, and that need is to entertain.

Before I share my general impressions about the feature, I want to acknowledge all of the hard work that RT’s staff put into it (really, though, when don’t they work hard?). They went above and beyond, and I thank them for supporting a genre I like to think is a hidden gem. RT has helped brush off the soil to uncover the sparkle beneath.

They gathered a great group of authors who contributed quotes for the article. Not just authors, either: I had the immense pleasure of contributing to the feature as well. I’m humbled and excited to be included alongside authors whose books have given me many hours of reading pleasure.

The headline reads, “Is SCI-FI romance ready to blast off?” Well, featured cover author Hank Phillippi Ryan’s 100 mega-watt smile tells us she couldn’t appear more excited about the possibility, so I guess the answer is a resounding, “Yes!”

Very cool that the headline is at the top—right beneath the magazine’s name. What an honor.

The first thing that struck me was the color scheme. Normally I gravitate toward dark colors when it comes to anything science fictional, but I thought the art director’s mix of yellow, red, and blue gave the feature a lot of warmth. The font was a neat combo of block and cursive lettering to reflect the hybrid nature of science fiction romance. There’s also a cool heart-thingie that makes me think Olivia Newton John is going to materialize any moment and belt out a rendition of “Xanadu.” (That song is classic, I tell you. Classic!)

It’s a four page spread! Color me bedazzled. I’m not going to quote anything—I’ll wait for anyone who’s read it to comment here and share thoughts. Never mind the fact that the feature has given me blog fodder for months!

That said, I thought feature author Stephanie Klose offered a marvelous take on the genre’s current state. She also pulled the quotes together in a very cohesive way. It reads as though all the authors were having a face to face discussion about the genre—the quotes were that in tune with each other. I mean, the article makes me want to go read a science fiction romance right now!

There are three other mini-features. The first is “The SCI-FI Trilogy of Love” by Faygie Levy which covers the trilogies by authors Sandra McDonald (THE OUTBACK STARS) and Kristin Landon (THE HIDDEN WORLDS). My first reaction was “What a great idea!” and my second was “D’oh!” Wouldn’t you know it: I’ve been blogging about both of these trilogies for months, but never in the same post. RT had my back, thank goodness. 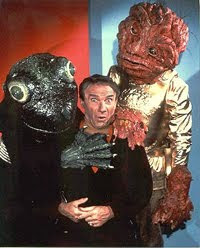 The second mini-feature is “Where to Start?” and it’s a list of books I recommended for readers new to the genre. It was a difficult choice to make because there are many good places to start. Can you imagine my pain in the future when there’ll be a hundred new SFR titles every month?

The third was a piece titled “If you like, then you’ll love: Science Fiction Romance” by Stacey Agdern. Pretty inspired, let me tell you—Ms. Agdern juxtaposed SFR authors with those writing other genres that contain similar styles/plots/characters. So, for example....

Better yet, scope out the feature for yourself and tell me what you think.

Postus Scriptus: What, you haven't read it yet? No problem. I'll wait! It's in stores now.