The $2.5 Billion (And Counting) AVATAR Question

Not the movie itself so much (that’s been discussed, both here and everywhere), but the film’s legacy and what that means to science fiction romance in general. It may not have won Best Picture, but it has undeniably made its pecuniary mark. 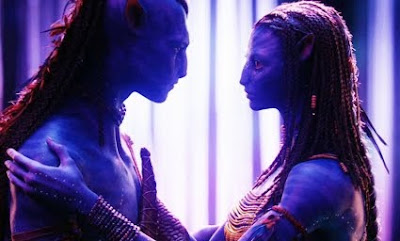 First, the obvious: The film made money—as in piles and piles of the stuff. To this date, it’s soared past $2.5 billion USD at the box office alone. And whether you loved—or even hated—the movie, you have to admit that this amount reflects mucho public interest in a science fiction movie with a very strong thread of romance running through it.

Ah, you say! But what does this have to do with books and SFR? A film is a totally different medium than books and never the twain shall meet, right? To which I respond: True to some point, but given AVATAR’s status as the Number One Movie Evah, it behooves us to question the assumption that such a high grossing film doesn’t have any bearing on its sisterly counterpart in books. Bear with me on this.

Horror film SAW performed well at the box office. For a film with a mere $1.2 million budget, it brought in slightly over $100 million worldwide. That’s a lotta hacksaws and guts, and the series as a whole is the most profitable horror franchise of all time (sorry, Jason and Freddy).

The success of AVATAR transcends this, however.

While the SAW franchise is successful, it still attracts a certain demographic—predominately young and male. This isn’t exactly the crowd who immediately comes to mind when you think of the majority of book buyers, and certainly not those behind the publishing scene (agents, editors, etc.). At $2.5 billion though, AVATAR does represent nearly everyone—young and old; single and married; SF fan or not; romance fan or not. Not everybody on the planet has seen the movie, or would even care to, but it has effectively reached across nearly every demographic divide out there to make that kind of money.

So I ask, with this level of success so evident, isn’t it worth investing just 2% more on the part of the publishers to clearly market science fiction romance as…science fiction romance? They can even use the brazen line, “If you liked AVATAR, then you’ll love…< insert title here. >” For that, people have cash ready and waiting.

"But AVATAR wasn’t half SF and half romance," you say. "It’s not SFR." That depends on how you define it, I say. The movie is clearly SF, and it clearly has the strong romance in it. The couple doesn’t spend time watching the sun set while whispering lines like, “Your eyes are twin shimmering galaxies yet to be born” (otherwise you could have kissed that $2.5 billion goodbye), but the film couldn’t exist without its SF or romantic elements. Those are the plot's supporting pillars. The dragons could go, the romance couldn’t.

To me, that says science fiction romance. 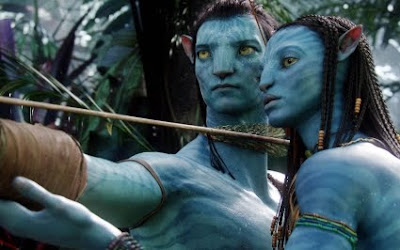 Not that FOX would market it this way, of course. A nervous studio betting nearly $500 million on something that isn’t an established character (Batman) or a sequel to a hugely successful film (uh again, Batman), is going go with what they know works in marketing, namely, images of attractive people against stuff blowing up rrrreal good in the trailer. But other recent movies presented similar well-produced trailers (2012…even TRANSFORMERS & STAR TREK), and they didn’t earn anywhere near the amount of cash those blue aliens have brought into their village.

So is it the 3D alone? Let's slip on our glasses and see.

MY BLOODY VALENTINE 3-D, a fairly recent, um, 3D movie earned $100 million at the box office. CORALINE (ditto) brought in $122 million. Both did well and the Tim Burton 3D remake of ALICE IN WONDERLAND just brought in $210 million from the rabbit hole. For now, the public appears to like its third dimensional adventures.

But AVATAR connected with moviegoers in an emotional way that went beyond the 3D and excellent effects. And again, I point back to the SF action elements (for guys) and the romance with heart (for women). Many, many people saw these elements and liked them—to the tune of billions. Elements, I might add, that have existed in SFR for the past few decades. So no, the 3D helped, but that element alone did not earn the billions. Right, BEOWULF ($82 million domestically)?

So again I ask, even if you hated the movie, or even SF in general, the numbers don’t lie. And even if publishers captured only .001% of the film’s success, those are still pretty good odds. Now I’m not expecting a complete turnaround by the 3rd quarter of 2010 with 50 AVATAR knockoffs on the shelves, but isn’t this thread of SF action meets SF romance worth exploring? Aren't publishers leaving money on the table by ignoring this success?