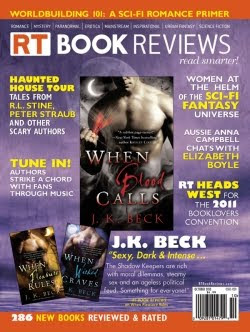 A couple of days ago, I went to the local B&N with my daughter so she could play with the Thomas The Tank Engine set and I could get caught up with the latest RT Book Reviews (October 2010). When I saw the cover, I was like, “Whoa!”, because at the top were the words “Worldbuilding 101: A Sci-Fi Romance Primer.” If that weren’t enough, the cover also featured the title of another article, “Women At The Helm Of The Sci-Fi Fantasy Universe.” Double whoa!

It was my lucky day. RT Book Reviews and its European sister, LoveLetter Magazine (for which I write an SFR column, if you’re new to my blog), have both been incredible about providing science fiction romance coverage. Domestic and international coverage of the subgenre in print mediums is crucial to spreading the word about the subgenre to readers—especially those who don’t spend time online. An unspoken partnership is evolving here, because science fiction romance offers readers something new, and the aforementioned magazines gain fresh content as a result. 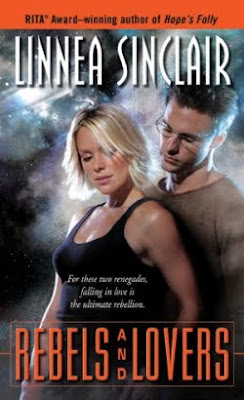 In “Shooting Stars: Why Women Are Piloting The Next Generation Of Science Fiction,” Linnea Sinclair (REBELS AND LOVERS) points out that there’s “a growing trend of female characters taking the lead in what used to be a ‘boys only’ club.” She goes on to state that “…the most important thing for new and old readers of science fiction and fantasy novels to know today is that times—and female characters—have changed.”

Very true, and praise Galileo. There are so many great quotes in this article, from the likes of Catherine Asaro, Marianne de Pierres, and Julie E. Czerneda. Contributors to the article stress how women authors bring the human and relationship elements to science fiction/science fiction romance/fantasy. For the most part, the boys wouldn’t touch them with a ten-foot pole, and as the saying goes, if you want something done right, you have to do it yourself.

There’s also an inset titled “Cleared for Liftoff: Sci Fi’s Newest Stars.” (waves to featured authors Katherine Allred and Gini Koch). When asked to name “the most challenging part of worldbuilding,” both of these authors cited “consistency.” That surprised me, but mainly because both authors did such a good job that I’d have never suspected it would be a particular challenge!

I liked the cute “What’s Your Subgenre?” feature, complete with a retro space rocket crewed by some kind of Space Family Robinson. Readers answer a short quiz to find out if they’d be fans of steampunk, time travel, space opera, or epic/high fantasy stories. I cheated and answered mostly A’s and Cs, which makes me a steampunk & space opera kind of gal. Who knew? 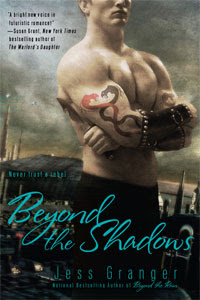 The other article was “Advice for Building a Science Fiction Romance—Complete With Its Own Universe” by none other than BEYOND THE SHADOWS author Jess Granger. She wrote a great opening: “Science fiction romance is in so many ways the new frontier of romance. No other subgenre has as open a canvas for innovation, conflict, and the heart-touching bonds of love we all adore.”

Ahhh…music to my ears! I find it exciting and quite a bit surreal to read an article in a national magazine that discusses such an important aspect of SFR. Jess Granger offers strategic advice that can help authors make their worldbuilding more sophisticated.

For example, she suggests making details in the world familiar so readers can mentally picture the world with ease: “If you’re talking about a chair, call it a chair, don’t call it a squarloq.” And while characters should be allowed to take technology for granted, she strongly recommends that authors “Pay attention to details when developing your technology.” Hear, hear. Because readers who know the difference between a “bulkhead” and a “sidewall” (one of her examples) will thank authors for their extra effort. Actually, I had to look up “sidewall” and am glad I did because there are like, three different definitions for it. :-P

Finally, in “Poll Reprt,” RT asked its readers, “Do you read science fiction or fantasy novels?” Heck, no, I’m not going to spoil the answer! You’ll have to read it for yourself. The number is, however, statistically significant.

So thank you, RT Book Reviews, and all the authors who contributed to the feature. We of the science fiction romance community salute you.