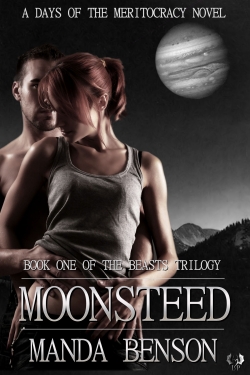 Back in November 2009, I blogged about the South Korean 2001 action film MY WIFE IS A GANGSTER. If you’ll recall, the heroine of that film, Eun-jin, “ties the knot with Kang Soo-il, a sweet, pudgy, teddy-bear of a guy who’s in for a big surprise once he discovers his wife’s line of work.”

In that post I indicated my wish for “a version of this couple in a science fiction romance” and that “I also like the idea of the nurturing hero to be the physical antithesis of the typically chiseled romance hero.”

Believe it or not, one author answered the call.

MOONSTEED by Manda Benson is that story. This ebook was just released by Lyrical Press, and the author was kind enough to send me an eARC. Given the promise of a sweet, pudgy hero paired with a kick-butt heroine, I devoured it in record time. Here’s the blurb to catch you up:

Zeta Verity killed a man who deserved to live, and let a man live who deserved death. Now she has a limited amount of time to stop him and bring justice to Callisto.

Born to excel but living in the shadow of her auspicious ancestors, Zeta is posted to the newly terraformed Callisto to work with specially bred horses. Killing a spy in possession of stolen data is just another day’s work. She’s not impressed by timid and scholarly Vladimir Bolokhovski, who arrives at the research base with a beautiful stallion he has genetically engineered. But when Zeta's superiors start disappearing and an arrest warrant is issued on her for spying, she discovers the man she killed is not what he appeared.

Once Verity discovers they're all part of some twisted game, she needs the help of both Vladimir and the dead spy to find and stop the mastermind behind it all.

I began MOONSTEED with high hopes, but also some trepidation. Would she really go all the way with such a subversive hero? Would the romance dynamic fulfill me in a way that was similar to MY WIFE IS A GANGSTER? In essence, would I get the same “rush”?

Lo and behold, Ms. Benson tackled the unconventional hero and heroine pairing with gusto. Color me one satisfied reader.

Without going into spoilers, Vladimir is every bit the endearing, pudgy scientist. Verity the warrior is a first-class bitch, but she’s extremely loyal to the “Meritocracy” society she’s sworn to protect. Both have a clear character arc by story’s end. It also helps that Verity’s interactions with Vladimir are so darn funny. They argue and tease one another in such a way that you just know they’re meant to be together.

And the love scenes between them are great. Not just because they’re hot, but because the author made their attraction believable. Verity is progressive in her attitudes about sex and sexuality, and I felt as if the reader was being invited to try on that role as well (e.g., contemplate the idea that all body types are beautiful and sexy).

And Vladimir—wow! He’s as valid a romance hero as any, both intellectually and physically. Toward the end, Vladimir has one line that just kills. I was so excited by it that I actually went back and re-read it a few times. That was also the moment I knew that Ms. Benson had delivered what I’d hoped for.

On a different tangent, here’s another factor that led to my being able to engage with certain aspects of the worldbuilding and romance of MOONSTEED:

The scene in question featured two horses copulating. Hold that thought for a moment.

In MOONSTEED, the residents of the Callisto colony rely on horses with cybernetic enhancements (with whom they have a telepathic link) to navigate the dangerous, icy, and uneven terrain (I did question why they hadn’t developed some kind of low flyer for that purpose, but the interface that riders had with their horses was explained in such loving detail that I went along with it).

Anyway, the copulating horse scene in La Bête, while utterly gratuitous and intended for sheer titillation, actually gave me knowledge (or at least some juicy visuals) about horse breeding that prepared me for the horse-related scenes in MOONSTEED. Fortunately, those scenes are not squicky like the scene in La Bête, probably because as a reader I could control my interpretation of the visuals.

However, if it weren’t for a wee bit of kink factor (rest assured, though—humans and horses do not have sex in this book), MOONSTEED could just as easily have been billed as a steamy romance. The story takes a good amount of time to introduce characters, plot, and worldbuilding before Vladimir and Verity’s first sexual encounter. So much so that even though the author had informed me about the graphic sex scenes, while reading I was beginning to doubt her, LOL!

The author took many risks with MOONSTEED, and I for one am glad that she did. A hearty thank you, Manda Benson, for satisfying my pudgy hero-meets-kick-butt heroine craving!