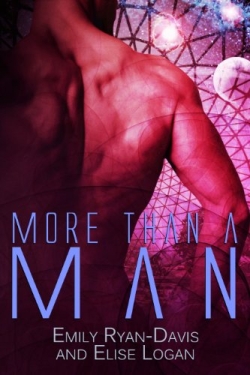 The other day, I noticed DA_January’s review at Dear Author of a book called MORE THAN A MAN (Emily Ryan-Davis and Elise Logan).

At first, I was about to pass it over since the cover struck me as that of a paranormal romance. It was only because my eye caught the “Romantic SF” tag and “C+” rating that I lingered. Usually I skip reading reviews of science fiction romances until I’ve read them, but for some reason, that day I became curious about what was behind the C+ rating.

I basically went in with two questions: Which element(s) didn’t work for this reviewer? Additionally, was it something that warranted discussion in the SFR community?


Before I share what I found, here is the story premise:

Manporium. It's where women of The Future go to buy the men of their dreams.

Genetically engineered to the bride's specifications, a Manporium husband is a perfect husband. At least, that's the theory. But twice-widowed Noelle Lytton shook Manporium's flawless track record when both her first and second husbands died tragically while pursuing interests she engineered into their makeup. Desperate for the perfect marriage she's always dreamed of, she knows her third Manporium husband will be her last. It's this man or nothing.

Vegetarian. Generously equipped. Dominant in bed. When Aya Lytton emerges from Manporium's creation chamber, he knows exactly what he is: custom-made for his bride. Noelle's wish list made her desires perfectly clear. But her desires have nothing to do with his overwhelming need to be more than just the man she created. He'll use every advantage he has to convince Noelle he's not just her match: he's irreplaceable.

Warning: Sometimes things don't go quite as expected at Manporium. A bride's wish list is, er...subject to interpretation and a man might come out with extra appendages and a mind of his own.

In short, MORE THAN A MAN is about a woman who uses the Manporium and purchases a man (and gets it on with said man) who has unexpected accessories. DA_January discussed one aspect in particular that didn’t work for her:


What do you do if you are a person created specifically for another? How can a relationship function when one person is manufactured – in all ways? Unfortunately, it was not explored.

According to the Dear Author review, MORE THAN A MAN possibly represents a misfire regarding the exploration of the impact of “manufactured” lovers. On the other hand, are we expecting too much from this type of story? Can a story with such an out there premise be expected to tackle concepts with rather serious ethical ramifications? 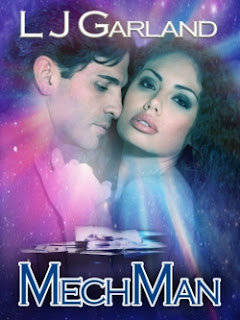 In contrast, BODY ELECTRIC (cyberpunk) by Susan Squires and MECHMAN (space opera) by LJ Garland both address the ramifications of manufactured people/lovers. Tanith Lee’s THE SILVER METAL LOVER explores the issue as well, but its classification as an SFR or even romantic SF depends on your perspective.

MECHMAN focuses more on action-adventure, and the ethical issues of manufactured people are somewhat sidelined in favor of the romance, but at least it’s acknowledged. (I also thought that Raven, the story’s kick-butt heroine, was great in that she consistently drove the story. Amazon has it for $2.99 and I don’t think you’ll be disappointed if you enjoy action-adventure space opera.)

Frankly, I’m waffling about reading MORE THAN A MAN. It seems as though the authors created an interesting, high concept idea but carried it only as far as the sexual relationship between the hero and heroine. If I read it, will I be left forever wondering what the story could have been?