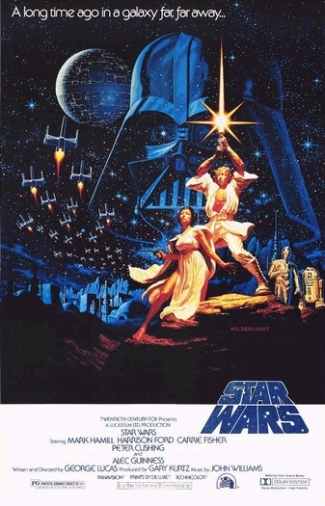 Yes, the film that changed all modern filmdom—SF or not—turns 35 today.

Looking back, it’s hard to believe that so many studio heads were originally dead set against this movie. Now, it serves as the very template of what they’re looking for in a tentpole movie: Likeable characters we can relate to; great special effects with big explosions; merchandising opportunities out the gundark; etc. etc.

And yet, at the time, several studios turned it down, and some of the people at 20th Century Fox supposedly hated it so much while it was in production that they only referred to it as “that space thing.”

Well, “that space thing” changed modern-day films—for the better (and the worse). Here’s what I mean:

STAR WARS proved that SF films could make money—as in lots of money. As in, “we have so much money, we’re going to have to pay someone to burn part of it to make room for more” amounts of money.

The strong, personal dramas of the 70s..? Gone overnight. It was as if millions of directors’ voices suddenly cried out in terror and were suddenly silenced (or at least a few dozen off of Topanga Canyon Blvd.).

The supreme importance of big name actors…? Removed with matte paintings. Now special effects became the star, with agents and managers tearing out their hair in anguish as they looked up at the Stormtroopers’ might starting down at them.

The rise of film merchandising…? Check and double check. Now, most films won’t see as many zeros in their budget unless you can add action figures, video games, and Happy Meals spread across the universe. So that’s a big greenlight to THE AVENGERS and a big oh hell no to more films like Lucas’ own THX-1138 in today’s climate.

Film merchandising had been around before STAR WARS (see the PLANET OF THE APES films, where Lucas saw the potential to build his own articulated plastic empire), but it had never taken off into the billion dollar stratosphere of STAR WARS figures like YakFace and “Telescoping Light Saber Darth Vader."

Attempting to recreate this formula in Hollywood sometimes yields big hits (“Hulk need divest his portfolio! Hide cash in offshore account!”) or not (John Carter scans the classifieds for any job above minimum wage).

The key difference with STAR WARS? It forged the template. No one had expectations so no one said “make it more like STAR WARS” in any way. (Although the studio heads did reportedly hate the fact that Chewbacca didn’t wear clothes. I guess his Prada gun belt wasn’t good enough for them.)
So 35 years later, let’s tip a glass of whatever the heck that blue-green stuff that Aunt Beru serves Luke, and raise a toast to the original STAR WARS (and to Marcia Lucas, for reasons listed here).