As you may have heard, Gerry Anderson, the creator of THUNDERBIRDS and other groundbreaking Supermarionation shows, passed away at the age of 83 on December 26, 2012. 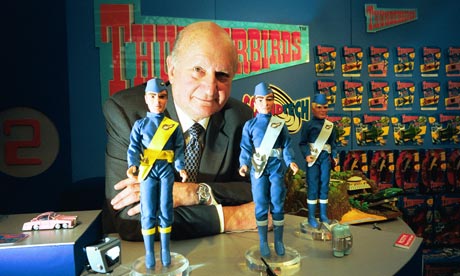 Gerry Anderson was a hero to me, and in my opinion one of the greatest in television history. At the age of 10, I stumbled across an episode of THUNDERBIRDS purely by chance in 1979 (I live in the U.S.), and I haven’t been the same ever since. I encountered the wonders of Supermarionation without any introduction or guidance regarding what I was watching. I can’t even begin to describe my reaction of awe to the surreal nature of the show and its stunning visuals. But I knew I was irrevocably hooked. 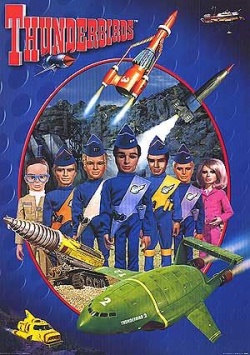 THUNDERBIRDS was one of my earliest, regular exposures to science fiction in a visual medium. I fell in love with the premise, the characters, and the technological magic of International Rescue’s various ships. The model work on that show is absolutely stellar. The ships and machines in THUNDERBIRDS are just as much characters as the people. I can’t praise the show’s technical achievements enough, even as I’m aware that I’m remembering it through the star struck lens of a child’s perspective.

THUNDERBIRDS has many other great elements, but I became particularly enamored of the oh-so-subtle attraction between Thunderbird 3 pilot Alan Tracy and the beautiful Tin-Tin.

It was the little things that indicated their budding romance: the way Tin-Tin would stand next to Alan; Alan’s brooding jealousy upon meeting one of her old flames; Tin-Tin’s fussing over Alan and her concern about his safety; and their cute little misunderstandings. Their relationship fascinated me and I desperately craved more of it, but understandably the show could only take the romance angle so far. However, those brief scenes between Alan and Tin-Tin had a powerful and far-reaching impact on my psyche. 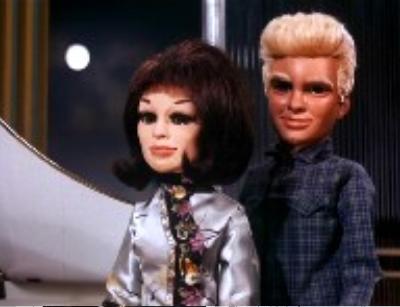 I remember feeling very sad when the year 1980 came because THUNDERBIRDS had gone off the air in my area. I thought for sure I’d never see it again. Therefore, I held on to an audio tape I’d made of one of the show’s episodes (“Danger at Ocean Deep”) with the fierceness of a tigress.

Years later, I discovered Gerry Anderson’s other series, including FIREBALL XL5, STINGRAY, CAPTAIN SCARLET AND THE MYSTERONS, SPACE: 1999, and JOE 90. I consumed them with a passion whenever I could lay my hands on a copy. I bought expensive hardcover books about the shows as well as assorted THUNDERBIRDS action figures. (Even a lunchbox!)

Finally, I reached a point where I could “relax” since current technology and the Internet pretty much guaranteed I’d never lose my favorite Gerry Anderson shows again. Even today, I associate the word “thunderbird” with his fantastical creations.

I’m terribly sad to witness the passing of such a legend. And yes, I cried, because it felt as though part of my childhood had died as well. Still, Gerry Anderson’s work will live on in my heart and mind, and doubtless in those of other countless fans.

Thank you, Gerry Anderson, for your vision, your passion, and your art. And especially for Alan and Tin-Tin because they are so adorable together!