I've been keeping an eye out for futuristic undersea adventures in science fiction romance, so when author S.A. Huchton came aboard the Galaxy Express to let me know she had just such a story in the pipeline I was immediately intrigued. MAVEN is a new adult sci-fi romance that takes place beneath the sea and will release on 6/3/13.

I'm excited to present an exclusive cover reveal for S.A. Huchton's MAVEN (The Endure Series #1). Read on for the blurb and an excerpt the author handpicked for TGE passengers! 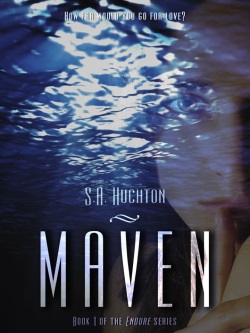 
How far would you go for love?

Since losing her parents at 14, young prodigy Dr. Lydia Ashley has focused on one thing: an appointment on the Deep Water Research Command Endure. Now 21, she's about to realize that dream, but nothing is how she imagined it would be. Her transitional sponsor forgets her, her new lab is in complete chaos, and, as if that weren't enough, she's about to discover something so horrific it could potentially destroy all life on the planet.

Daniel Brewer, a noted playboy and genius in his own right, may be exactly what she needs... Or he may make everything worse.

Has she finally found a puzzle she can't solve?

"Did you have a chance to look at those files I sent yet?" Daniel changed the subject.
"Files?" She thought back. "Oh, those files. No, not yet. I can take a look now though, since we're waiting for everyone else to get here." Lydia set her cup on the desk and walked around to the chair. Settling in, she called up her messages and opened the attached files Daniel had sent a few days earlier. He stood behind her, watching.
"Hmm," she murmured as she read the first one. "It looks like experiment results, but I'm not sure what the initial subject is." She opened another. More results. "I don't get... Wait. This list of bacteria?" She pointed at a column on the screen. He put a hand down on the desk and leaned in close to her to read the words. She was surprised that her voice didn't tremble when she spoke. "These are all marine specimens. Specifically, ones that have been found around deep ocean volcanoes. They're rare and we don't know much about them yet, but we do know they're dangerous. These are some of the most resilient bacteria on the planet. They have to be, given the environment they live in.”
Daniel frowned. "What kind of experimentation would have been going on here with these things?"
"That's what has me concerned.” She bit her lip. "These documents don't give any information aside from which samples were being used and basic test results, like genetic composition and temperature reactivity, but they’re reference documents for another research project. Given the dates they originate, I would have heard about any work with these specific bacteria, and I know of none. I wouldn't normally pick up research from another study without specifically being tasked, but something here isn't sitting right with me." It was hard to concentrate. At this proximity, she could smell the scent of his body; soft and clean, with the faintest hint of his aftershave.
"So, what will you do?" Daniel asked.
Lydia considered that for a moment, struggling to retain her composure. "Did you say you thought there were other related files somewhere?" She turned her head slightly, but couldn't face him directly. Not with him this close.
He shrugged. "It's possible. There was a ton of old data dumped into a trash file I dug up while cleaning out the system. Backups of backups, it looks like. I didn't know what I was looking for specifically, so I tossed anything from 3-SSR into the same group. It wasn't much, but there was other stuff I couldn't identify." He straightened, much to her relief. The near contact was clouding her brain.
"If I gave you a list of keywords to search for, would that help? Based on these documents, I can narrow down what might be contained in related files."
"Yes," he said. "Definitely. If I know what I should be looking for, I have some tools for doing entire sweeps of all connected computers, including the Endure’s core programs. How long would it take you to make up that list?"
She looked at the list of files he had already sent. "There's forty-eight documents here. Not all of them may pertain to this project, but it will take me at least a day to do a quick once through. Are you sure you have time to take this on?" Lydia faced him.
"Absolutely," he said, his hazel eyes locking on to hers. Her breath caught unexpectedly in her throat. Something in the way he looked at her made her think that she could ask him for anything at that moment and he would say yes.
The sound of the lab door and voices shattered the moment. Lydia spun around and closed the list of files, along with the messaging program.
"Looks like people are arriving. I'll go fire up the lab computers so we can all see the new software." She rushed out of the office, hoping no one else could hear her pounding heart.

Starla Huchton released her first novel, The Dreamer’s Thread, as a full cast podcast production beginning in August 2009. Her first foray went on to become a double-nominee and finalist for the 2010 Parsec Awards. Since her debut, Starla’s voice has appeared in other podcasts including The Dunesteef Audio Fiction Magazine, The Drabblecast, and Erotica a la Carte. She is also a voice talent for Darkfire Productions, and narrates several of their projects, including The Emperor’s Edge series, This Path We Share, and others.
Her writing has appeared in the Erotica a la Carte podcast, a short story for The Gearheart, and an episode of the Tales from the Archives podcast (the companion to Tee Morris and Philippa Balantine’s Ministry of Peculiar Occurrences series), which garnered her a second finalist badge from the 2012 Parsec Awards. Her second novel, a Steampunk adventure entitled Master of Myth, was the first place winner in the Fantasy/Science Fiction category of The Sandy Writing Contest held annually by the Crested Butte Writers Conference. Maven is her third completed novel and the first in a planned series of four.
After completing her degree in Graphic Arts at Monterey Peninsula College, Starla opened up shop as a freelance graphic designer focusing on creating beautiful book covers for independent authors publishers. She currently lives in Virginia where she trains her three Minions and military husband.
Connect with S.A. Huchton: