I'm a big fan of android romances and since they're few and far between I'm here to share the news of Diane Saxon's SHORT CIRCUIT TIME, which released earlier this month. There's also a bit of time travel involved. Here's the cover and blurb: 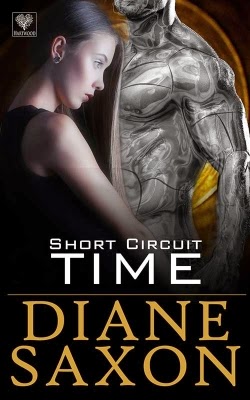 In the year 2086, Zaphira is alone, the last survivor of biological warfare on Earth. Before he died, her scientist father promised other survivors would come. Nobody has. So when a horribly mangled android shows up claiming to be her father’s assistant, Aiden, who has been sent through time to rescue her, she’s both frightened and astounded.

The last time she’d seen Aiden, she’d been sixteen, head-over-heels in love with him and had literally thrown herself at him, leaving her devastated by his rejection and him running for the hills. The following day, she’d been told of his death.

Eight years later he’s miraculously back, this time asking for her help. Without it, he won’t survive. But can she really put a dead man back together with tweezers?

For Aiden, everything has changed. There are no other humans, no government, and time travel has left his new android body unexpectedly weak and suffering from inexplicable genetic changes in eye and hair color, brought about by his molecular shake-up. Unbelievably, the scientist who sent him is dead, and he must rely on the scientist’s daughter to help him. A woman who he’s not so sure has his best interests at heart.

The last time he’d seen her, Zaphira had been a sixteen year old with a dangerous crush on him and he’d been rocked by the turmoil of his own feelings. Now she’s twenty four and literally holds his survival in her hands. Too bad everything he does and says seems to annoy her.
Trusting her might be his undoing. But he is left with no choice.

For Zaphira, getting used to the transformation of old Aiden to android Aiden requires a large mental leap. But when android Aiden starts to rebuild his human form to a new and improved standard, things start to get tricky.

The Aiden she loved as a little girl was her father’s nerdy assistant. The new Aiden is hot. But are her feelings as strong eight years later or are they simply a cherished memory?

I love how the hero's android nature is so prominently featured on the cover! (I guess his physique ain't bad, either!) I'm looking forward to checking this one out.

The author has a handy list of buy links for SHORT CIRCUIT TIME on her site.