It's time to feast your eyes on the cover for Jody Wallace's TRAITOR (Entangled Publishing), the second book in her Maelstrom Chronicles! This apocalyptic sci-fi romance will drop on July 28, 2015. Not only that, you can enter a giveaway here for a chance to win a copy of ANGELI, book one in the series. 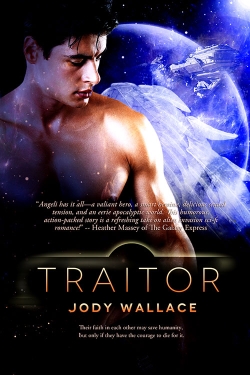 He was branded a traitor. And he may be humankind's salvation…

Captain Nikolas EstherVorn is a traitor. Or so it was decreed after Niko disobeyed protocol while trying to save Earth from other-dimensional creatures. Stuck in a prison cell, the last thing he needs is to be in close proximity to sexy-as-sin Dr. Sarah CallenJoseph. Not with him damn near ready to break out just to get to her.

Niko's desire isn't quite his own…and Sarah can prove it. He—along with the other soldiers on the disastrous mission—were drugged with some kind of toxin. Niko has no clue how the drug got into his body or why, but Sarah suspects there’s a link between the toxin and the fertility crisis of Shipborn humans.

To investigate is forbidden. But as lust becomes something deeper, binding them together in a way neither expected, Niko and Sarah must battle time—and their superiors—to uncover the secret that could save humanity...or destroy it.

Want to know more? Visit the author's site to read an excerpt.

Jody Wallace will give a PDF copy of ANGELI to one lucky passenger! (full disclosure: that's my blurb on the cover). To enter, leave a comment for this post and provide an answer to the following question: would you want to have a pair of angel-style wings? Why or why not?

The deadline to enter is midnight EST on Friday, July 10, 2015. Check back here to see if you've won! 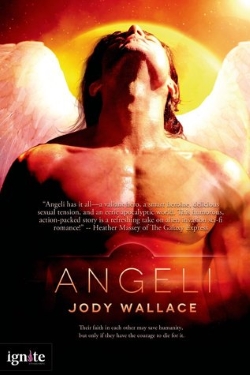 Gregori’s last mission is to save Earth from the demons threatening to take control. He doesn’t care if he survives as long as he does his best to save a world he believes is worth rescuing despite his superiors’ conventional wisdom to the contrary—until, that is, he meets Adelita, a human refugee, whose spirit and determination give him a renewed reason to fight. And live. He’s falling for her, despite the fact he’s told her nothing but lies and there can’t possibly be a future for them.

Adelita can hardly believe the archangel Gregori, sent to save mankind, has lost his faith and his edge. After he saves her from a demon attack, she vows to help him recover both, by any means necessary. But can she keep her own faith when she learns the truth about who and what Gregori really is?