Charlee Allden fills us in on the least you need to know:

Arena Dogs is a scorching-hot, new scifi-romance series; full of hunky alpha heroes, strong, capable women and thrilling space adventure. Each Arena Dogs book contains a complete romance and an ongoing exploration of the Arena Dogs world.  Book 1, Stealing Mercury was released in May 2015. Tempting Jupiter will be released later this year and will introduce two new Arena Dogs and their human heroine.

Now for the cover reveal and blurb! 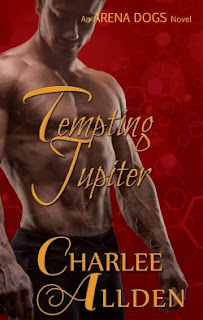 Jupiter and Seneca are Arena Dogs, genetically engineered slaves created to serve at the will of their masters. Slated for death after being grievously wounded in a rigged Arena match, the two are instead rescued and taken off the planet by the Resistance. But something goes wrong with the escape plan and their only hope to remain free is a human woman with an agenda of her own.

Feeona is a thief and a con artist, but that doesn’t make her one of the bad guys. Normally, the dogs would be safe in her care, but their presence in her life has interfered with her plans and a cause so close to her heart that nothing can be more important—not even the two men who are rapidly taking up residence in her heart.

Will Feeona find a way to save them all or will she be forced to choose who to save and who to betray?
*** 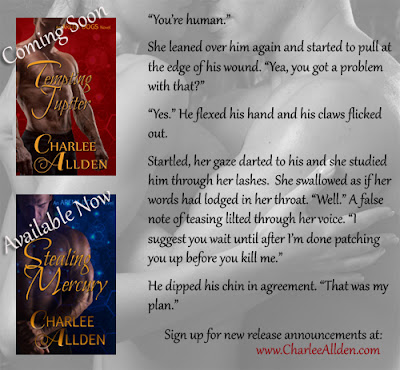 While we wait for news of the book's release date, check out the first scene of TEMPTING JUPITER here.

Charlee Allden is a long time fan of love, adventure, and happily-ever-after. She grew up in Florida where a huge fallen oak tree in the swampy woods near her home served as her very own Star Ship Enterprise. Today, Charlee is a multi award winning author of sexy, intense, romantic adventure and suspense. She still lives in Florida across the street from a miniature version of the swamp she lived by as a child. You can connect with Charlee online on Twitter: @charleeallden or Facebook: www.facebook.com/CharleeAlldenAuthor and sign up for new release announcements by visiting her website at http://www.charleeallden.com/.
Posted by Heather Massey at 12:01 AM
Newer Post Older Post Home