"Live fast, fight well and have a beautiful ending."
—Saint-Exmin

Truer words were never spoken. Dangerous men are great and all, but there are times when the only characters that will satisfy are brainy, savvy, butt kicking anti-heroines! There is nothing sexier than a woman who can face down a spacecraft with a single gun, hijack a starship, pilot an XYZ-you name it fighter, or take on a whole space armada with nothing but ingenuity for a shield.

All of these women have one distinctive quality in common: Power. Whether it’s manifested in combat, vengeance, technology, or love, they ain’t afraid to flaunt it. With exciting and complex characters like these, I often wonder why bland, vanilla, and TSTL heroines abound—at least in the romance genre.

Why, as Sherry Thomas pointed out, don’t authors take more risks and compose tales with bold heroines that pull as many if not more strings than the hero? Heroines that wield immense wealth, power, and control, whatever form that takes.

Aren’t they romantic enough? Does the idea of anti-heroines really threaten that many romance readers, or is this more an issue of publishers (consciously or unconsciously) suppressing certain archetypes for purely monetary reasons? Recent discussions at Romancing The Blog and Dear Author approach this issue from another angle, namely self-insertion vs. identification.

Twp possible explanations for the underwhelming number of anti-heroines in the romance genre are cognitive biases and gender stereotyping. If a female character displays ruthlessness, for example, a reader might fail to take into account that the quality exists independent of gender, and this bias negatively colors the perception of the female character. Perhaps anti-heroines break an unspoken rule about gender expectations, resulting in cognitive dissonance when a reader can’t shake his/her preconceptions. Hence, fewer of these characters survive the publishing grind and make it to bookstores.

For whatever reason, I’d wager that anti-heroines teeter on being the norm for science fiction romance stories, at least the current batch. Heck, it would be thrilling if they were the norm. That’s what I call cutting edge—and oh so apropos that a trend like this could explode from a genre that explores love & romance in the future.

So why do we love to read about these anti-heroines or watch their adventures on film/television? Well, they’re cool. Empowering. Unabashedly independent. They’re slinky sexy in an electrifying-the-air kind of way. These spitfires make gunslinging eminently fashionable. Let’s not forget how devious they are—and deadly. Trust me, you don’t want to land in the cross hairs of one of these legendary ladies.

Or maybe you do.

And whether it’s shown or not, you know they’re sassy and uninhibited in bed. No one drips sex appeal and slays her opponents with equal aplomb like the brassy Valkyrie Saint-Exmin from the film BATTLE BEYOND THE STARS:

Other righteous examples of these anti-heroines can be found here, here, here, and here. There’s also the endlessly fascinating characters Starbuck and Caprica Six from BATTLESTAR GALACTICA. 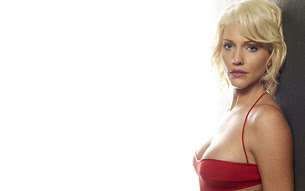 And from anime, may I present the legendary Queen Emeraldas: 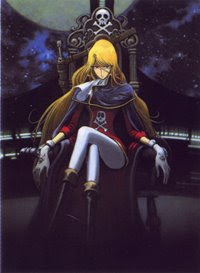 So many great anti-heroines, so little time. (Why aren’t you reading a book about one right now?!) Better yet, hop on a shuttle and zoom over to Lisa Paitz-Spindler’s site where she presents these kool kitties on her Danger Gal Friday feature. I’ll keep the lights on for you.

It’s time for more deliciously foxy anti-heroines. You tell me: who are the Super Vixens of speculative romance that women want to be and men want to be with?