Male fans of science fiction romance are out there, and some are quite vocal about how much they enjoy the sub-genre. But many (read: most) aren’t.

They're not vocal. And they're out there. Period.

Despite the ability to create an anonymous identity, guy fans don’t seem to comment very often about SFR in the online sites and forums. And I know it’s not because men don’t enjoy talking about books. Visit any SF/F forum on the block and you’ll see what I mean. They love it, often leaving no stone of minutiae unturned.

Then there are the men who would enjoy science fiction romance, but are as leery of it as Sam-I-Am's neighbors staring down at a fresh heaping plate of green eggs and ham. 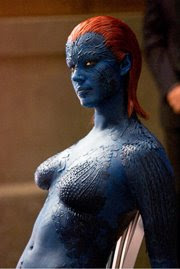 Sure, loads of guys flock to theatres or their 50-inch plasma screens to enjoy SF films and TV shows that invariably involve some kind of romance, even if it’s just a token one. But all of these mediums are visual, and even the combined forces of Jessica Alba, Rebecca Romijn, and Tricia Helfer can be pretty paltry when it comes to feeding the voracious intellect and appetites of a gentleman SF fan.

So given this, why don’t more of these adventurous souls explore SFR, what I consider as part of speculative fiction's wild frontier? And if they already do, why the reluctance to participate in online discussions?

The reluctance to read SFR could be attributed to stereotypes about the romance genre, a few of which have a kernel of truth in them. Or it could be a reluctance to read stories wherein the prose is heavily steeped in romance traditions. Or maybe there’s a pervasive fear that any hint of romance will dilute the plot or speculative aspects, even if the book hails from an SF imprint.

Or, maybe it all just goes back to the third grade playground and the atavistic fear of catching the cooties if they go near anything slightly feminine.

Well, leave it to me to point you fellas in the right direction! Herewith are 7 reasons all of you sexy, progressive, strapping pillars of testosterone should delve into science fiction romance and talk about it: 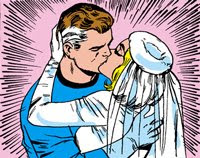 1) You’ve just had a long day at work, the commute’s a pain in the ass, and you arrive home only to discover the rent/mortgage was due yesterday. Frankly, you could use the release. A great SFR book will happily provide that, 100% cootie free. Trust me.

2) The heroes of science fiction romance are handsome, magnetic, and possess a keen intelligence. They score at least half the credit for saving the world/universe/dimension. Often, they engage in hot nookie in outer space* and beyond. You could be one of those men by proxy.

3) Despite what society tells you, nature wired men with the capacity to feel. It’s perfectly okay to indulge in your emotions. But don’t just limit yourself to happy, sad, or angry. Embrace your inner Dr. Phil. Science fiction romance can feed not only your brain but also your capacity for luuuurrv....

4) Your favorite SF authors often include a romantic subplot. I know—not strictly a separate genre, but these days the lines are blurring. I consider books like that a gateway to science fiction romance. And truthfully, doesn’t the romance have an intrigue all of its own? (Correct answer: “Yes!” while pumping your fist high in the air). 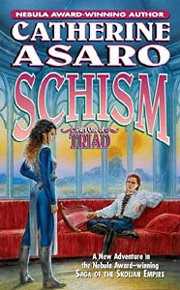 5) There are plenty of science fiction romances with scientific amusements. Some don’t play the “romance” concerto at all. They read more like romance undercover. You like a little mystery in your life, right? That’s what I thought.

6) The online SFR community is nurturing and deeply supportive. If other guys try to invalidate your feelings about science fiction romance, we will promptly reconfigure their neural pathways so that they instantly agree with your preferences.

7) And the final reason? C'mon, you know you really want to. Search your feelings. You know this to be true! Give in...to the SFR side!

Okay, guys, now’s your chance: talk to me! Here at The Galaxy Express you can wax about SFR to your heart’s content and you’ll be all the stronger for it. Name a science fiction romance book you read. Add to my list and share what's great about SFR. Or, tell me how the SFR community can encourage more involvement from our Y-chromosome brethren.

By the way, no cricket chirping allowed (like I said, nurturing!).

*© Kimber An of Enduring Romance