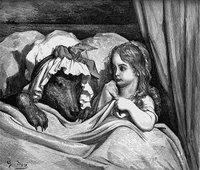 “So Little Red-Riding-Hood pulled the string and the door opened. The wolf, seeing her enter, hid himself as much as he could under the cover-lid of the bed, and said in a whisper, ‘Put the cake and the pot of butter on the shelf, and then make haste and come to bed, for it is very late.’”

These sinister lines hail from an earlier, non-Disneyfied version of the famous crimson clad miss...one in which the plucky lass doesn’t live happily ever after. *Gasp!*

Whether it’s a mash-up with a comedic wink-wink approach (SHREK), or a serious examination bringing out their inherent sex and horror (THE COMPANY OF WOLVES), fairy tales are certainly ripe for contemporary re-imagining. After all, stories that remain as popular as these for over hundreds of years certainly must resonate universally, don’t you think?

Welcome to our continuing celebration of Jordan Summers, an author who provides a twist of romance in her apocalyptic trilogy/fable. And so without further ado, strap on your red cape, grab a slice of cake with butter, and dig in…!

The Galaxy Express: You’re an author who boldly goes where your Muse takes you. What are the challenges—and the joys—of being a multi-genre author?

Jordan Summers: When I first started seriously writing, the biggest challenge was being allowed to write in multiple genres. There were (and still are) a lot of agents out there who want you to focus on one genre, and one genre only. They want authors to build a name before moving into other genres. That was pretty much impossible for me. My brain doesn't work that way. I've always been a 'whatever sounds fun that's what I'll write' kind of gal. Now it's not much of a problem, since so many authors are successfully writing in more than one genre.

TGE: You’ve described RED as a science fiction story with fairy tale elements. What’s your favorite fairy tale and why?

JS: Actually, I consider RED to be a dark fantasy with sci-fi elements. The sci-fi comes from its futuristic setting, but at its heart, the book is a dark fantasy. My favorite fairytale would have to be Beauty and the Beast because I think it's such a terrific love story. Brings a tear to my eye every time. Little Red Riding Hood would be a close second, even though I never liked the ending of that story. I felt bad for the wolf.

TGE: Having done a significant amount of research for your books, what do you consider to be the top five most important elements of worldbuilding?

I hate to admit this, but I didn't do much research for the DEAD WORLD trilogy. I made it all up. I simply imagined what it would be like to live in a post-apocalyptic, environmentally barren world where science and technology continued. I asked myself a lot of questions like: What would survive? Would people know what certain animals looked like, if they'd been extinct for over a hundred years? What happened to all the zoos in the world? What kind of transportation would still be around in a gasless world? I decided on hydrogen vehicles since they're already in development (and use in Germany).

I also took Maglev train technology a step further. If governments were destroyed in the war, how would the world be governed? Would it be governed? I broke my world into independently governed republics. I also created an International Police Tactical Team that operates as a world police force. I took DNA profiling a step forward and made it to where everyone had to be registered with a republic in order to be considered a real citizen. This entailed giving a DNA sample and getting computer chipped so that you could be tracked via GPS. I basically used technology that exists already and took it a step further. It becomes quite frightening when you do so.

I think the most important aspects of world-building are: Consistency, clarity, description, characterization and believability.

If you're writing any book, you need to make sure that your world remains consistent. Set up the rules for the world right away and do not break them…unless you can give the reader a compelling/believable reason why. Make sure your world is clear. Try not to confuse the reader. Description varies from author to author. I'm not a naturally descriptive writer, unless I'm writing a historical. I have to 'work' at putting description in. My belief is that a little description goes a long way, so make it count. I also believe that the setting of a book should be treated like a 'character'. Make it real. Breathe life into it. And finally, no matter what type of world you create, make it believable. Readers will follow you through any world as long as they believe it 'could' exist.

TGE: RED has very dark elements, but you’re known for stories that end on an upbeat note. Please share a little about your method for resolving these two elements in terms of craft.

I actually didn't resolve these two elements—at least not neatly. I'm a firm believer that you have to stay true to your story and your characters. With RED, I set out to write a darkly disturbing twist on a fairytale. Most fairytales are dark. Over the years we've tried to lighten them up. The rest of the Dead World series has lighter moments mixed in with the darkness. I feel that the storyline ends appropriately given the set-up I created. I knew going into the Dead World trilogy that I was making a departure from my usual type of romance writing. It became obvious once the killer appeared. I knew it wouldn't be believable if I twisted the end to match my other 'lighter' work. That said, I did follow basic romance guidelines in the sense that my hero and heroine end up together in the end.

This is tough because there are a lot of terrific books, films and TV shows out there. For books I'd have to say, Ender's Game, Old Man's War, Stardoc, and anything Pratchett. It's harder for movies because I LOVE so many of them. I guess I'd have to say the Matrix (Ghost and the Shell), Star Wars, Aliens and Blade Runner. They're all so good. Yes, I know I'm cheating by not naming just one. As for television shows, when I was a kid, I loved Lost in Space. My most recent favorite sci-fi TV show is Firefly. Terrific characterization on that show.

TGE: Is there anything else you’d like to share about your work or science fiction romance in general?

Readers should know that when they pick up one of my books, they're in for an adventure. :)

I think science fiction romance is coming around again. There seems to be a renewed interest in the genre, which is wonderful. It's waned for a lot of years. I think readers are going to see a lot more releases over the next two years, if the recent sales are any indication. Gives us all something to look forward to in the future.
Thanks for having me. 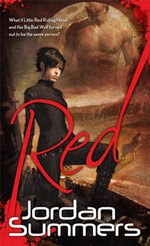 Jordan, thanks for visiting The Galaxy Express, and for your art!

Now, one lucky passenger will win a copy of Jordan Summers’ RED! Why shouldn’t it be you?

The deadline for the drawing is Sunday, November 23, 2008, at 9 p.m., EST. In order to get your name in the proverbial hat for a random drawing (contest limited to U.S. residents), all you need to do is huff and puff and leave a comment for this post.