It’s a Jungle Out There

Jungle rot, sleeping sickness, leishmaniasis…these are just a few of the tropical diseases one could incur during a trek through the jungle. Chagas disease is yet another, and it’s transmitted by “blood-sucking assassin bugs.”

Did you feel that vibration just then? It was me, shuddering.

Never mind the humidity—jungles are a veritable cornucopia of creepy critters lurking in the hundreds of thousands, ready to feast upon my exposed, tender flesh. It never ceases to amaze me that so many of my fellow human beings regularly coexist with centipedes, Zodariid ground spiders, tropical fire ants, poisonous frogs, fuzzy moths, and snakes of every length and thickness.

And even with all of that paralyzing heat, you can’t even go swimming, not unless inviting a gang of piranhas to gnaw you to the bone is your idea of a swingin’ time. 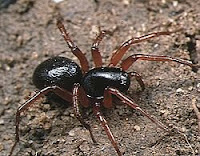 So Heebie Jeebie Central a.k.a. jungles are out for me, yet I’ll be the first to tell you I’m an armchair enthusiast.

So it was with much voyeuristic fun that I recently finished Katherine Allred’s CLOSE ENCOUNTERS (Eos, April 2009), virtually accompanying Genetically Engineered Person Kiera Smith on her voyage to Orpheus Two, a planet riddled with jungles where she—what’s that? Oh, I understand your confusion. Ms. Allred was kind enough to send me an ARC, you see…!

Anyhoo, Kiera is an agent for the Bureau of Alien Affairs, and it’s her job to investigate Orpheus Two, a planet in which independent trade company Dynatec has taken a suspiciously strong interest. A handful of the indigenous people are on the verge of extinction, and unless Kiera can learn the secret to reversing the process, Dynatec wins ownership of Orpheus Two. And the corporate overlords would rather win the planet sooner rather than wait for the Buri to die out, if you get my drift….

Honestly, thank goodness that there are people willing to perform this kind of dangerous work. Not just in books, but in real life, too. Scientists, humanitarians, and medical personnel are just a few of the heroes braving the treacherous tropical frontier.

Right now, we have our share of alienish creatures like binturongs and spectacled caimans, but just think of the taxonomical undertaking that would be involved if/when we discover another habitable planet. You could not pay me anything to enter a jungle here on Earth, let alone an alien nightmare of unknown proportions, but I’ll happily pay the necessary taxes so that the advance guard of explorers and scientists can wrestle with the challenge of first contact.

Instead, I’ll be sitting in my armchair, on Earth, watching the holo-vids.