Mother, spouse, older sister, writer, ex-soldier, high school drop-out, dog owner (or dog owned), half couch potato, half intermittent jogger, wannabe renovator and avid reader who watches too much television, sinks too much money in clothes, likes animals more than humans, recycles, wore braces, never downloads copyrighted stuff, was a nerd without the grades, has a belly laugh that turns heads in theaters, can't stand bullying, is mother hawk more than mother hen, votes even if candidates aren't that great and thinks formal education is highly overrated (probably because she has none).

Read on for Nathalie Gray's take on what it is about villains that makes it impossible for us to look away:

Love them or love to hate them, great villains will make a lasting impression. And if said villain is really bad (bad in a good way), he can outshine even the hero or heroine. A certain Robin Hood movie comes to mind... As much as I enjoy Kevin Costner, he didn’t stand a chance against Alan Rickman’s dementedly wicked Sheriff of Nottingham.

Just as we’re likely to recall a good one liner we heard or read, “good” villains will stick with us. Gormenghast’s character of Steerpike, the scheming young man and his twisted rise to power. Stephen King’s Nurse Wilkes and her sledgehammer. Richard Harris’ Hannibal Lecter. Fava beans, anyone? We all remember these fine, fine villains. Because that’s what they are: unforgettable.

But beyond the impact they have on our psyche, I have always wondered about the attraction of villainy in books and movies. What makes these people so damn intriguing? Even back when folks wore togas and sat around fountains to, well, evade house chores, the role of baddie in a play wouldn’t go to just any actor. For your reading pleasure, I have compiled a short list of what I think are popular motivations to show some love for the baddie:

Redemption
I’m the first one to admit that I love, love when a baddie is redeemed. Not too many and not too often. But nothing makes my inner Chihuahua chase her tail with savage glee like a killer growing a conscience and turning protector. Or a thief moved to leave a little something behind in compensation. A lot of us want, deep inside, to be able to forgive, make it all better. Maybe it’s a woman thing. Maybe it’s more universal than that. Who knows!

Titillation
The appeal of the “bad boy/girl” is an old and well-trodden path. And it goes beyond the black leather and motorcycles. Who hasn’t had a fantasy or eight about taming that handsome bad guy? Come on, admit it, you totally *loved* the odious Colonel in the movie The Patriot! Personally, I’ve had a serious crush on author R.A. Salvatore’s character of Artemis Entreri, the haunted assassin who can never find inner peace. Wounded soul + hot body + killer skills = hello, le sexy!

Unpredictability
Heroes are predictable; some of them are even a bit boring. Look at it this way: heroes mostly do good...villains mostly do what they want. 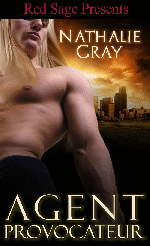 To learn more about Nat’s own villains, visit her at www.nathaliegray.com.

Five lucky passengers who leave a comment on this esteemed blog will win a copy of Nat’s most recent release, AGENT PROVOCATEUR, on sale from Red Sage Publishing (which turned 15 years last month...15 YEARS, dude, seriously).

This giveaway will self-destruct in twenty-four hours.