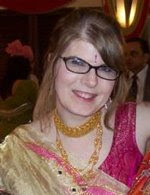 From childhood, Karin Shah wrote herself into her favorite TV shows before falling asleep every night. But, despite graduating with a degree in English as a Writing Art from SUNY Oswego, Karin had no plans to write as a career. She got her Master’s in Library and Information Science at the State University at Buffalo and worked as a School Librarian in a suburb of Rochester, NY, for five years, before discovering writing was where her heart lay.

Karin lives with her amazing husband Nikhil, brilliant children Natalie, and Roman and two mischievous basenjis, in Columbus, Ohio. She belongs to RWA, Central Ohio Fiction Writers, the Futuristic, Fantasy and Paranormal special interest chapter of the RWA, and the Society of Children’s Book Writers and Illustrators. 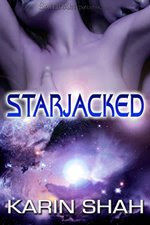 Just like fictional characters, writers have backgrounds and influences that color the novels they write. I’m no exception. I was seventeen in 1986 and the character of Ripley made a big impression on me and how I write female protagonists. The scene where she gets inside the loader and physically fights the alien queen is so iconic there’s a Direct TV Commercial.

In ALIENS, Ripley has a backstory some of the audience knows from the previous movie: everyone on her old ship was killed by aliens, and Ripley through her own ingenuity and perseverance was the only survivor. For those who haven’t seen the first movie, James Cameron et al, give us a dream to ratchet the newbie up to speed and give us a scare. The nightmare, the news that her daughter has died from old age, and the way she is treated by the board who revokes her flight license, let us know deep inside Ripley there’s a gooey center, because on the outside she is one tough cookie.

I have a soft spot for the kick-ass, take-take-no-prisoner heroine. I especially like them misunderstood. Hard on the outside and vulnerable on the inside.

There’s not much sign of a cream-filled center when the hero of my SFR STARJACKED, Rork, meets Tia Sen, the heroine. In this scene, his mission to track the gang of pirates who murdered his friend has gone wrong. All he can do now is pray his cover is intact. Tia stops her underlings from beating him to death, but her motives seem less than pure:

…“How many times do I have to tell you, Jeb? Don’t damage the merchandise.” She enunciated each word as if to a small, rather thick child, instead of to the short, muscular man who stood in front of her.

“Tia—” Jeb began, his voice mutinous, but she cut him off.

“I’m the first mate and leader of this mission.” Her voice exuded authority. “I and only I, decide who lives and who dies. And I get first choice of any booty we take. That includes slaves.”…

In ALIENS, we see Ripley’s softer side through her interactions with Newt, a little girl who has managed to survive on LV-426:

In STARJACKED Tia’s softer side is hinted at in the prologue when Tia discusses her plans with her friend Kaber:

The com hissed as the tense voice on the other end continued. “This is the biggest thing we’ve ever done. Your father—”

Tia didn’t have to be reminded of the penalty should her father discover even the least of her activities. “Can only kill us once.”

But for me what I like best in ALIENS is the relationship between Hicks and Ripley. The happy for now ending works for me, but I wanted more, which is why I write romance:

Tia peered at him over her shoulder. Her cheeks flushed. “If you’re finished gawking…” Her voice was gruff.

He sat beside her on the bed and squeezed some of the cream onto the wound. She handed him the bandage. He gently covered the open portion of the wound.

“Put some of the ointment on the other scars.”

Rork gingerly began applying the cream to her new and old scars. At first, Tia held her body rigid, carefully holding the front of the robe over her breasts, but as he realized he wasn’t hurting her and his strokes became firmer, she sighed and leaned into his touch.

Rork allowed his fingers to linger on the rough edges where scars met unmarked skin. The heady scent of her body filled his nostrils as he leaned forward to add more pressure, and he couldn’t resist inhaling deeply. Inured now to the shock of her disfigurement, arousal rushed back. Her nape was so near his lips. She was naked beneath her robe, evoking the memory of his earlier fantasy.

Her breathing staggered, and he realized suddenly he affected her as much as she affected him.

Although the plots of my novels range from space opera to fantasy to paranormal romance, you can be sure to find in all my heroines a little bit Ellen Ripley.

What are your influences? What authors, movies, books or real life experiences shape what you write or like to read?