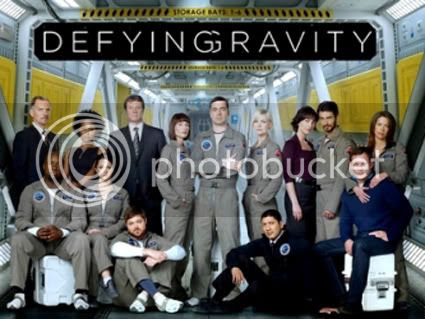 Ever since I was a child, I’ve cried during pivotal scenes from films and television shows. This habit was like catnip or fish bait to my two younger brothers who endlessly teased me over it. During family movie nights, tears would roll down my face during the emotionally wrenching climax of whatever film we’d be viewing. Then I’d hear the unmistakably sound of mock sniffling from the other side of the couch. Followed by bursts of laughter.

Well, my brothers have grown up, but other things never change.

Several nights ago, I watched the pilot episode of DEFYING GRAVITY on hulu.com. I’d heard about the show from Laurie Green, proprietor of Spacefreighters’ Lounge. And since she helped turn me on to Sandra McDonald’s terrific THE OUTBACK STARS, I sat up and listened when she blogged that “…DEFYING GRAVITY is science fiction romance….Four men, four women, and a six-year mystery mission in space....”

Now, even with Laurie’s stamp of approval, I had my doubts. Because of the potential time investment, I’m very picky about my television shows. If I do start a series, nine-and-a-half times out of ten I’ll choose an SF show if one’s airing. (I made an exception for ENTOURAGE, but with Ari Gold in the house, who wouldn’t?!) But televised SF doesn’t always deliver. Or sometimes it’s not there to watch at all.

In The Great Sci-Fi Divide: Why don’t we want science fiction on TV?, there were many insightful comments about why there aren’t more SF shows. Here are a few I culled together:

• Budget considerations/inferior quality because of lower budgets
• Competing mediums: SF fans obtain their SF from other sources (e.g., Hulu, DVD)
• TV series are often canceled before they end, resulting in viewer mistrust
• SF is considered too complex for TV, which is seen as a form of mindless escapism (which speaks to a marketing issue since SF films are frequently positioned as action movies)
• The mythology/speculative elements overshadows the characters
• Multi-episode story arcs alienates viewers who haven’t watched from day one
• Advertisers will only support what they perceive the “typical” viewer wants
• Large-scale, epic stories don’t always translate to the small screen (exceptions: BATTLESTAR GALACTICA, STAR TREK)

There were other reasons cited for the so-called divide, and in truth, they all probably play a part. Even though I’m always happy to hear about a new SF show, there’s always the possibility that the negatives will outweigh the positives. So why did DEFYING GRAVITY leave me in tears when I watched the pilot?

I enjoyed it. A lot. The tight focus on the characters and their emotions really got to me. I didn’t cry through the whole episode (because boy, would my brothers have a field day with that, even now). The part that started the waterworks was the montage scene toward the end with the angst-driven song. I couldn’t tell you the name, but it’s been in my head for days.

The production values worked for me. Especially since I was fresh off of an episode of SPACE: 1999, I was impressed with how far television has come in depicting spaceships and their accessories. The near future setting was refreshing. The bit with the nano suits and how the writers worked in explaining them was very inspired, and made for very accessible SF.

From the acting to the writing to the cinematography, there was plenty to enjoy. I especially liked that last shot, where we discover that Ajay placed the you-know-what on the hull. Come to think of it, I shed a few tears over that scene as well.

DEFYING GRAVITY is not a perfect show. I would have liked to see a few harder science fictional elements (but this is network television after all. Le sigh). I thought the writing could have been stronger, and some of the relationship dynamics played out along rather predictable lines.

But there’s enough present that I could commit for the long haul if the show found a stronger overall voice. DEFYING GRAVITY could succeed if it stayed focused on character driven stories, used a limited number of settings (e.g, Mission Control, the Antares), and delivered content via smaller scale, standalone episodes. As Laurie noted, it certainly has a strong science fiction romance flavor, probably more than any other SF television shows that have preceded it.

In this review, Todd VanDerWerff noted:

Theoretically, a space-set workplace soap opera could work and work really well. There’s been enough Star Trek slash-fiction over the years to suggest there’s a vocal contingent of sci-fi fans who might really like that, and there’s something refreshing about the idea that having weightless sex in the cockpit could send the craft hurtling into the sun if you’re not careful (or something).

Overall, I believe DEFYING GRAVITY is a step in the right direction for SFR on television. I wonder where we’ll leap to next….