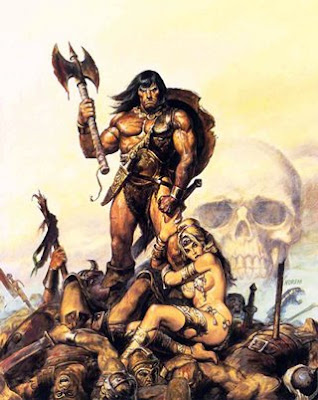 I’ve been thinking a lot lately about why science fiction romance lacks for more new romance readers. I have my doubts it’s the science fictional components. Rather, I’d argue there’s a stronger case that the lack of abundant Alpha heroes in the genre that cause it to fly under the radar.

Alpha heroes are present in virtually every romance subgenre (e.g., vampire, rake, business tycoon). In fact, the popularity of paranormal romances is practically synonymous with the Alpha vampire/shifter/demon heroes.

I have nothing against Alpha heroes per se. My concern is when it seems to define a genre/subgenre as a whole. In Paranormal Romance VS Urban Fantasy, Jordan Summers wrote:

"I also think that readers are moving to Paranormal Romances because the books are hero-centric…I think alphas lend themselves to paranormal romances.”

Which echoes SB Candy’s observation in On the role romance novels play that romances “…portray female fantasies, and most women-who-like-men want their fantasy men to be dangerous yet nurturing and protective.”

“But are women in romance novels really the protagonists?

“On a percentage basis of the entire genre, my impression of current romance novels is that the heroes are primarily the protagonists while the heroines are the primary point of view character (or narrator) and that if the hero has a point of view that it’s been heavily filtered through a feminine narrator to fulfill the female fantasy aspect Candy mentioned above.

“The hero has generally has the major emotional character arc, the hero has the goals while the heroine tends to be reaction mode, the hero still is the one to primarily confront/defeat the villains (not always still talking percentage impression here). The heroine are generally victimized/traumaitized (romance tropes: fated mates, captive, blackmail/revenge, secret baby, etc.) Yes, the heroines survive and score moral victories but again these victories seem to be the result of reaction rather than action on the heroine’s part or through action by the hero. Hence my perception that the hero is generally the protagonist and not the heroine.”

I suspect that all of the above is why SFR hasn't found a larger audience yet. Ms. Summers goes on to state:

"But I believe now readers are looking for the fantasy (ie a strong male who’s willing to take charge, protect what’s his, and isn’t ashamed to say so)."

When I read that statement, I didn't see the hero-centric aspect. I saw the damsel in distress scenario. (And this isn't a response to Ms. Summers directly; it's my reflection on the issue at large.) With such diversity in the romance community, is this fantasy really so prevalent? Did vampires etc., tap into the ultimate damsel in distress fantasy?

In response to the My Paranormal Malaise post at Dear Author, Lisa Paitz Spindler asked:

"Why is it the paranormal character is so often the hero and not the heroine?"

Yeah, what's up with that?

Are readers looking for *the* fantasy or *a* fantasy that takes them through a wonderful romance, regardless of who's in charge? In the future, technology can be the great equalizer. I'd have a difficult time buying a big bad Alpha male taking charge and doing all of the protecting when the heroine has access to all kinds of advanced weaponry, or engineering/robotic feats at her disposal.

One thing I love about SFR is that I get more variety—both hero-centric and heroine-centric stories. We can't strictly associate SFR as replete with Alpha heroes or as being hero-centric, yet these very aspects are both an appeal and a bane. Many readers like variety, but publishers need high concept stories that are easily repackaged over and over again.

SFR is not so easily repackaged. I've been wondering if readers who love Alpha male heroes can enjoy SFR heroes, who more often than not tend to be "good guys." The genre offers heroes who are strong yet not dominating (e.g., Admiral Philip Guthrie from Linnea Sinclair’s HOPE’S FOLLY, March from Ann Aguirre’s GRIMSPACE, and General Thomas Wharington from Catherine Asaro’s ALPHA).

What do you think? Can SFR attract new readers with stories that involve non-Alpha heroes, and wherein the heroine is the true protagonist? Or are romance readers in general too addicted to a certain type of fantasy?

Postus Scriptus: Thanks to Lisa Paitz Spindler & Alison for their contributions to this post.